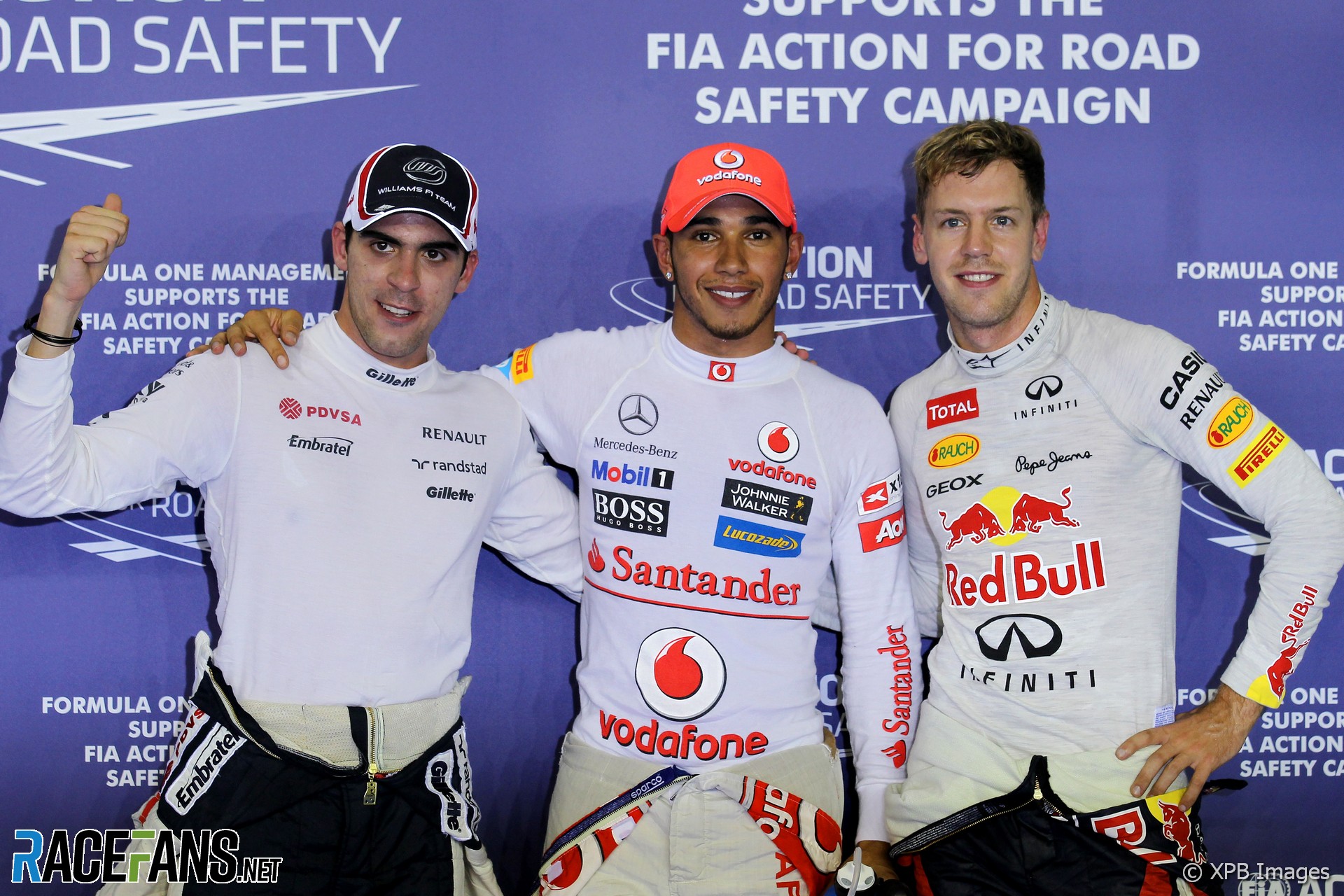 Lewis Hamilton claimed his fifth pole position of the year at the Singapore Grand Prix.

He is joined on the front row of the grid by Pastor Maldonado, who relegated Sebastian Vettel to third.

The large performance gap between the soft and super-soft tyres nearly caught out some big names in Q1. Felipe Massa ended the session 16th after electing not to do a run on the softer rubber.

Lotus decided they were vulnerable and sent both their drivers out for a run on super-softs towards the end of the session to guarantee their place in Q2.

Bruno Senna clipped the wall on his final lap while in 17th, but fortunately for him he fell no farther. Kamui Kobayashi was already back in the pits in 18th place.

Vitaly Petrov out-qualified Heikki Kovalainen but both Caterhams were knocked out along with the Marussias and HRTs.

Romain Grosjean’s session looked to be over early in Q2 when he went off and hit the barrier. But he got his Lotus back to the pits and was able to continue.

Senna wasn’t so lucky. He hit the wall at turn 21 – his third such mistake of the weekend – and limped back into the pits with suspension damage.

Vettel took to the top of the times with a lap of 1’46.791, but Hamilton showed he had the pace to match, eclipsing the Red Bull by a tenth of a second.

The final laps were a frantic scramble for survival among the midfielders. Michael Schumacher claimed his place in the final ten with his last effort.

That eliminated Nico Hulkenberg, who said he could have gone quicker in the first sector.

Also out was Kimi Raikkonen while team mate Grosjean completed a remarkable escape by securing a place in Q3. Felipe Massa joined those whose sessions ended after Q2.

Eight drivers left the pits at the beginning of Q3 but only three of them set lap times to begin with. Hamilton carried over his pace from Q2 into Q3 and led Button and Vettel with a scorching lap of 1’46.362.

Grosjean was next onto the track and a slightly scruffy lap of 1’47.788 ultimately left him last of those who set times. The Mercedes drivers did not return to the track and will occupy the fifth row.

Vettel had failed to improve on his Q2 time with his first effort. He returned to the track in front of Hamilton’s McLaren but although his second effort was quick enough to move him in front of one McLaren it couldn’t carry him past both.

That left Vettel third on the grid after a superb lap by Maldonado put the Williams on the front row.

Hamilton didn’t need to improve with his final lap to keep pole position. That proved to be a good thing for him, as he clipped the wall with his final effort.

123 comments on “Hamilton on pole as Maldonado shines in Singapore”