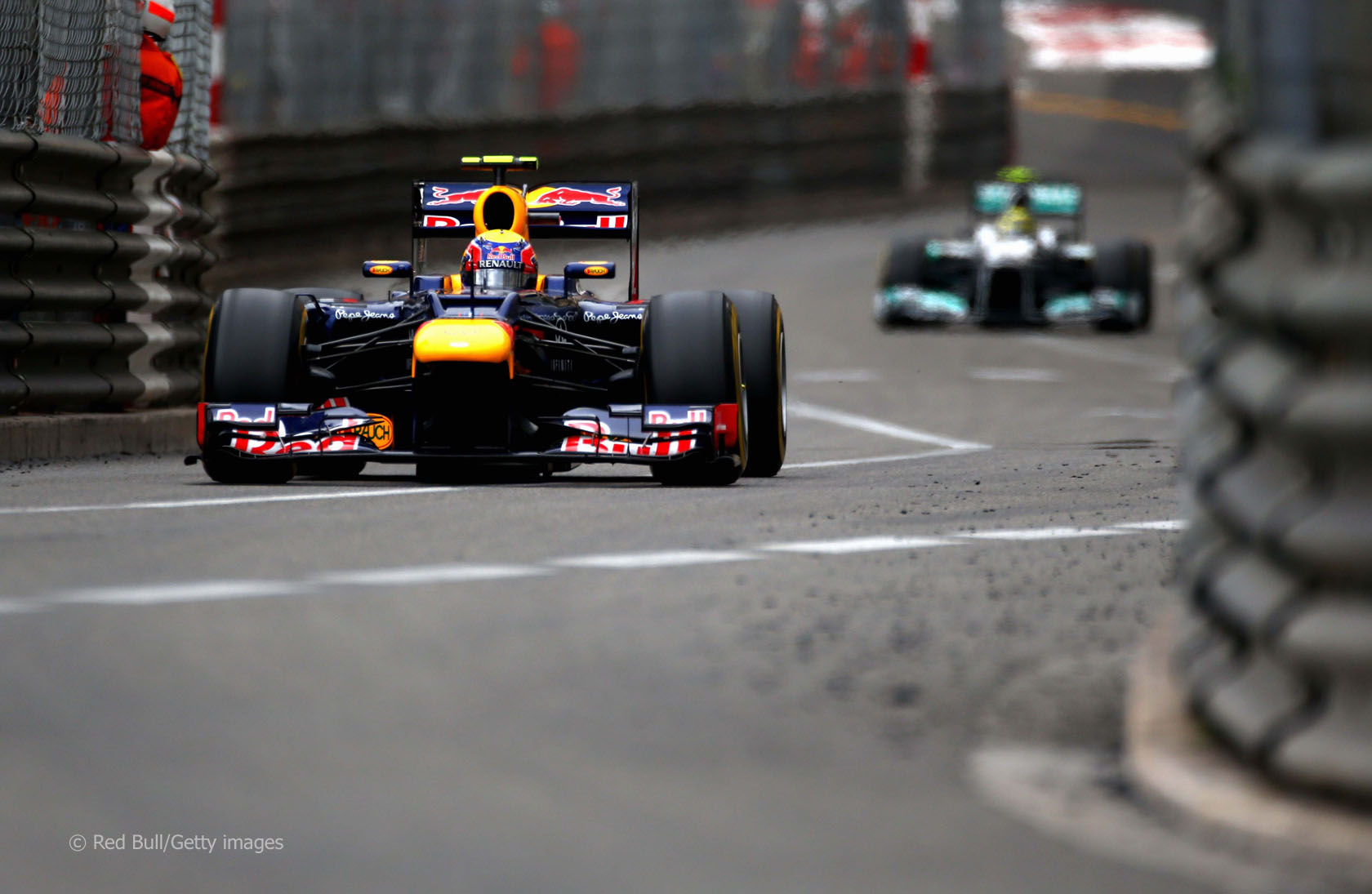 Monaco Grand Prix winner Mark Webber was voted the Driver of the Weekend – though he received slightly less than one-third of the votes.

It was the closest vote so far this season.

Webber outqualified his team mate for the fourth time this year. He was second on Saturday, which became pole position after Michael Schumacher’s penalty.

Despite having made some poor starts in the past, Webber got off the line well to retain the lead from Nico Rosberg and withstood the pressure from the Mercedes driver in the dying stages of the race. He grabbed his second Monaco win in three years and Red Bull’s third in a row.

A tough race to pick a driver better than the rest. I voted for Webber on the basis of the fact that he kept his cool and drove a sound race even when for a while it seemed that Rosberg would soon overtake him.

He was helped a lot by Monaco itself where passing is rare. On any other track it would have been tough to say the least.

Yet, he did his job which was to start well and then to not make any mistakes. Also for a driver who spent last year in the shadow of his team mate and pressurized by a lot of people for his lack of performance against his team mate, he has done a great bounce back job.
MahavirShah

Webber. First of all, he didn?óÔéĽÔäót get this on a silver platter. The recent past has shown that having a quick car is not enough and one car up front does not prove that condition. Ask Button and Vettel.

Second, his Q3 lap was heroic. That car never showed that edge to that point. He wrung it out of the car. (Schumacher was quicker on Saturday, but he didn?óÔéĽÔäót have to be the fourth car wide going into Sainte Devote. He knows better than that. That was a GP2 fail. In any case you can?óÔéĽÔäót make a case for Driver of the Weekend based on ifs and buts.)

Third, he was flawless in the race. Then there was the rain. It?óÔéĽÔäós one thing when its pouring and you sort of know what the track will bear, but when its spitting or raining in some corners and dry in others, you have to be kind of a genius. If you pile into a corner 5kph too quick, you are in the barriers instantly. If you go too slow you have the man behind right on you looking for the wiggle that will allow the pass.

The guys behind have the complete luxury of watching your apex and exits, looking at your wheel spin, and just shadowing your pace. He was perfect. He never had a ‘moment’.
DaveW

Kovalainen was left out in Q1 on Saturday, losing 16th place to Toro Rosso’s Jean-Eric Vergne by less than five-hundredths of a second. He gained a few places off the line and found himself in front of Jenson Button.

Kovalainen managed to keep the McLaren driver behind him for the majority of the race – even through the pit stops. He picked up front wing damage while defending his position, had it changed, and struggled with low tyre temperature when the rain fell. Nonetheless he brought the car to the chequered flag 13th – Caterham’s best position this season, which promoted them to tenth in the constructors’ standings.

I’ve gone for Heikki, the only driver who apparently actually had to race for his finish. Brought the Caterham home for a good result. All the other drivers were just involved in the traditional follow-the-leader procession.
Abuelo Paul

Kovalainen. Good qualifying, but what convinced me was his race.

It was incredible to see him racing, he was fighting from start to finish. I was really impressed, I wonder when he is going to get his second chance in a top team.
Yobo01

Heikki Kovalainen has been driving everything (or maybe more) out from his Lotus/Catheram for the last like two years, and under the circumstances Monaco provides, it was finally visible for everyone.

Maybe a top team as McLaren was a bit too early for him in his second season, but now he could really capitalise on the experience he gained.

Voted for him, although it?óÔéĽÔäós clear, that many other guys have had a hell of a race. So although it could have looked like “nothing happened” yesterday during the race, of course it did, but maybe not in the most spectacular way.
AndrewT

Alonso survived a clash with Grosjean when the lights went off and decided to look after his tyres at the beginning of the race, instead of chasing Lewis Hamilton in front of him. He jumped the McLaren at the first pit stop, and this third place was still enough to guarantee him the individual lead in the drivers’ championship.

Alonso ?óÔéĽÔÇŁ qualified on place where car belongs, gained position on start due to perfect start (again), pushed purple-hard when it mattered and overtook Hamilton during pit stop. Could not do more so settled for decent third and leading championship now.
evolutoinut

Alonso. If he wins the championship this year it will be one of the best performances from a driver in a season ever.
TommyB

2012 Driver of the Weekend results so far

Webber and Kovalainen appeared in the top three of the poll for the first time in 2012. Alonso is still the driver who is chosen in the top three most frequently – out of six races, he has been there four times.

Have your say on the Driver of the Weekend results in the comments section below.