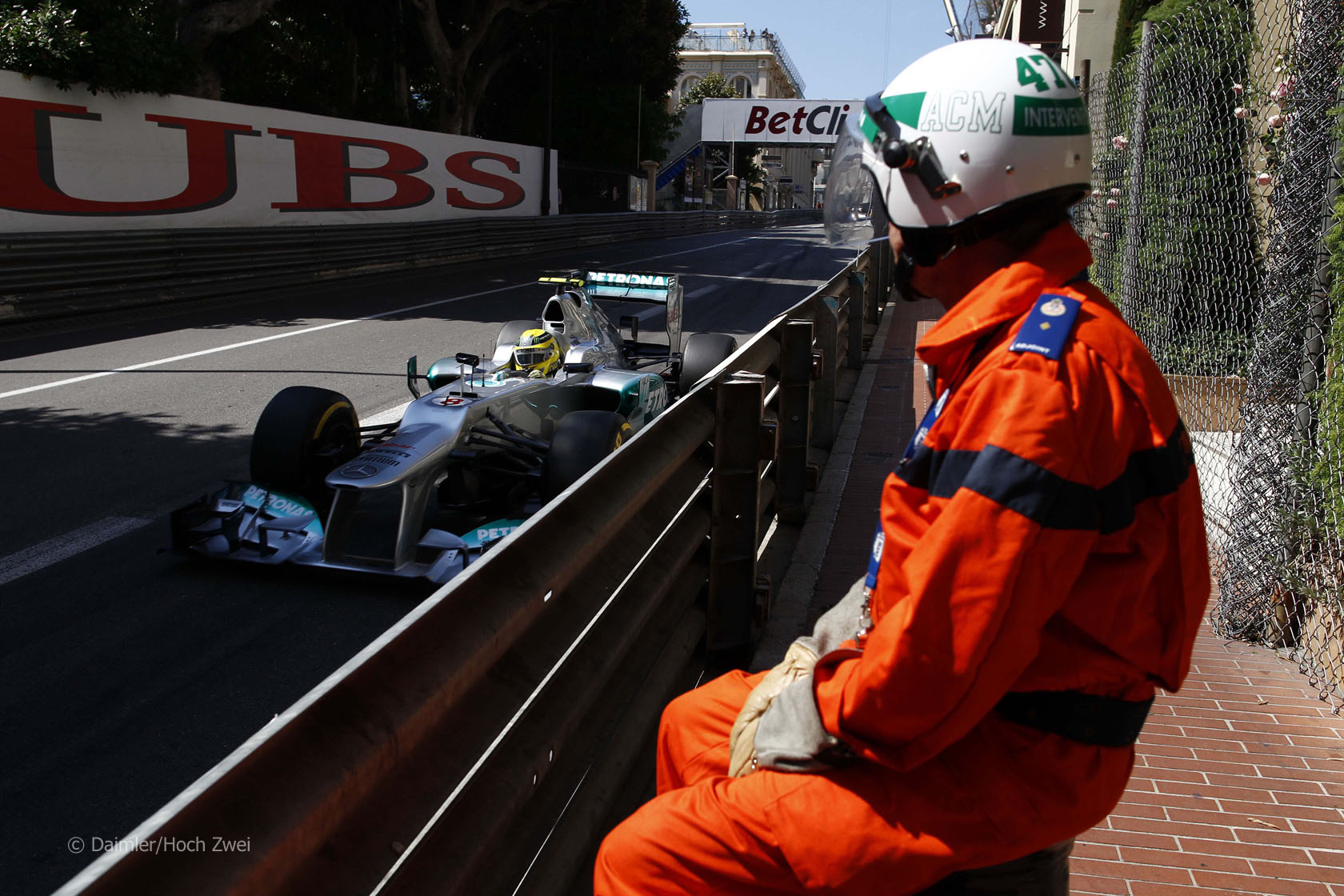 Ten of the best pictures from the Monaco Grand Prix weekend. A Monaco marshal enjoys one of the best seats in the house, watching Nico Rosberg turn in at Mirabeau.

Kimi Raikkonen donned James Hunt’s helmet for the race weekend. The 1976 world champion made his final F1 start at Monaco for Wolf in 1979.

Raikkonen spent most of first practice in the garage having his steering changed, and rain in second practice meant he had little dry running on Thursday.

In the damp second practice session, Jean-Eric Vergne took the opportunity to familiarise himself with the track and Pirelli’s intermediate tyres.

In the race, he was the only driver to use the treaded tyre, gambling on the conditions worsening in the later laps. Unfortunately for him, they didn’t. There was no repeat of Williams’s Spanish success in Monaco. Pastor Maldonado was relegated to last after a controversial collision with Sergio Perez during practice.

Bruno Senna, being pushed past his team mate on the grid, took a single point for tenth, his third points finish of the year.

Chaos is about to break out at the start. Fernando Alonso is moving left to try to pass the slow-starting Lewis Hamilton, but as Romain Grosjean moves left in avoidance Michael Schumacher can’t avoid him.

It wasn’t the first time this year Schumacher and Grosjean collided on lap one – they also did in Malaysia. This time Grosjean came off worst, though Schumacher also retired later in the race.

Alonso pressured Hamilton on the first lap, getting alongside the McLaren at the hairpin, but find passing as difficult as ever at Monaco.

Raikkonen hit trouble with his tyres and quickly had Schumacher and Nico Hulkenberg bottled up behind him. Soon Bruno Senna, Paul di Resta, Daniel Ricciardo and Heikki Kovalainen caught them too. Mark Webber scored his second win from pole at Monaco with Rosberg and Alonso less than a second behind. The team jump into the Red Bull pool has become an annual event, as they’ve won the race for the last three years in a row.

Christian Horner began the tradition in 2006, jumping into the pool wearing a Superman cloak to celebrate the team’s first podium finish, scored by David Coulthard.

28 comments on “Top ten pictures from the Monaco Grand Prix”