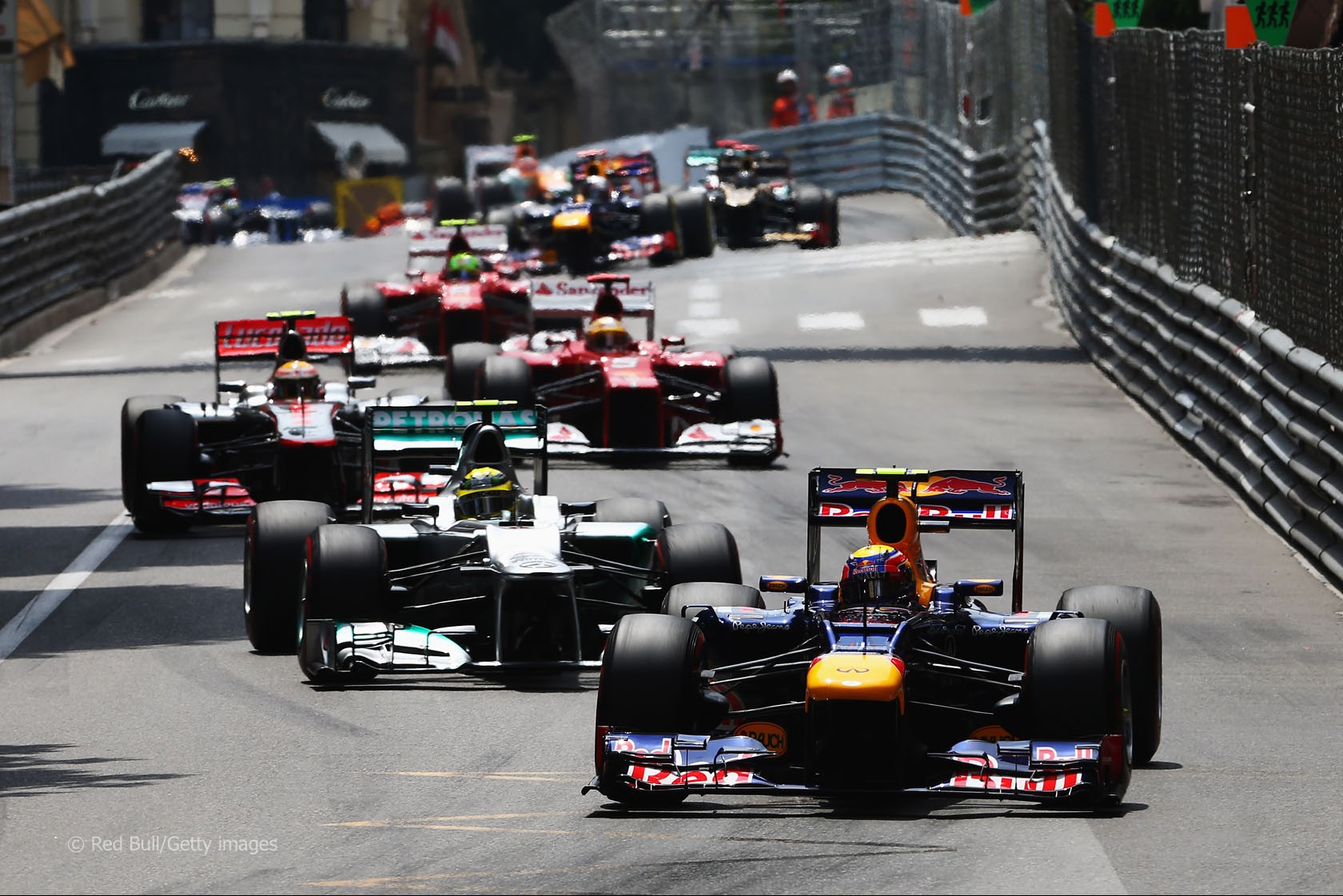 Which F1 driver had the best race weekend in Monaco?

Compare all the drivers’ performances below and vote for who you think was the best driver of the Monaco Grand Prix weekend.

Sebastian Vettel – A set-up change on his car on Saturday left him having to work hard to get into Q3. Once there he chose not to set a time, and instead start on the soft tyres and run a strategy counter to that of the other. It would have worked better had Raikkonen’s tyres not gone off, creating a gap for the other front runners to make their pit stops and come out in clean air. Nonetheless he ran strongly to lap 46 on his softs before pitting, jumping Hamilton and Massa to take fourth.
Mark Webber – Beat Vettel again in qualifying – he’s 4-2 up now this year. Second became pole after Schumacher’s penalty, and he got off the line better than usual to take the lead. Weathered constant pressure from Rosberg at the end of the race, particularly during the brief shower, to take his second Monaco win.

Jenson Button – Failed to reach Q3 for the second race in a row and was delayed in the first-corner crash, falling behind Kovalainen. McLaren’s efforts to jump the Caterham through the pits failed. Button spun at the Swimming Pool trying to pass Kovalainen, then went off for good at Sainte Devote with eight laps to go.
Lewis Hamilton – For the first time this year, Hamilton wasn’t among the top two qualifiers. He made a slow start from third which he complained to his team about on the radio afterwards. More frustrations followed: he was jumped by Alonso during his pit stop, then lost another place to Vettel, and came home fifth.

Fernando Alonso – Started fifth and contained his pace in the opening laps, looking after his tyres. This paid dividends when it came time for his pit stop, allowing him to pass Hamilton. With hindsight, he admitted afterwards, he could have stayed out longer and gained more places – perhaps even taking the lead – had they suspected the soft tyres would take so long to warm up.
Felipe Massa – Only a tenth off Alonso in qualifying and finished close behind too in a much better showing. Michael Schumacher – His penalty from Spain cost him pole position, relegating him to sixth. The Mercedes stood up impressively well to a heavy whack from Grosjean on the run to the first corner. He fell behind Raikkonen, losing a lot of time when the Lotus driver’s tyres went off. Was on course for seventh when he lost fuel pressure – his fourth retirement this year and the third time it was out of his hands.
Nico Rosberg – Pushed Webber hard for the win, with rapid in- and out-laps around his pit stop, but couldn’t get the jump on the Red Bull. Second podium of the year moves him up to fifth in the drivers’ championship.

Kimi Raikkonen – Requested a steering change on his car after his installation lap in first practice, which meant he had little dry running on Thursday. Qualified over half a second off Grosjean, and slipped back in the first stint when his tyres went off. Was unfortunate to lose a place to Hulkenberg as Perez pitted. “Ninth was the best we could do today,” he reckoned.
Romain Grosjean – Looked very confident and quick in practice, though couldn’t find the same performance gain on super-softs that the others got. Started fourth but edging away from Alonso put him into Schumacher’s path, spinning him out of the race. Though he bears no blame for what was a racing incident, it was precipitated by another less-than-stellar start.

Paul di Resta – Unhappy with the car’s balance in qualifying, he started 14th. Moved up to 11th at the start, then ran long at his first pit stop to move up to ninth ahead of Hulkenberg. That became seventh at the flag.
Nico Hulkenberg – Was held up in the queue behind Raikkonen and made the unfortunate choice to pit on the same lap as the Lotus. Snuck past when Raikkonen was held up by Perez, and finished one second behind his team mate.

Kamui Kobayashi – Disappointed to miss Q3 and start 11th, he damaged his car making contact with Grosjean at the start and had to retire.
Sergio Perez – “I am disappointed and I expected a much better result,” was Peter Sauber’s short and stark assessment of qualifying after Kobayashi failed to reach Q3 and Perez crashed in Q1. Replays indicated Perez’s front-left wheel had sustained damage before he crashed – possibly from contact with the barrier – but at least this wasn’t as serious as his 2011 shunt. Recovered well to finish 11th for the third time in four races, and was hard done with his penalty. Daniel Ricciardo – Out-qualified Vergne as usual but dropped behind Kovalainen in the second half of the race. Retired after damaging his steering in the Swimming Pool complex.
Jean-Eric Vergne – Lost out badly at the first corner, slipping to 17th. His team countered with a bold strategy, switching from super-soft to soft tyres earlier than everyone else. His tyres were fading late in the race when he was running seventh so they tried another gamble, pitting for intermediates. But the rain never got heavy enough and he slumped to 12th.

Pastor Maldonado – From hero in Spain to zero in Moanco. Insisted his FP3 clash with Perez was accidental but it didn’t look it, and his ten-place grid penalties suggests the stewards weren’t convinced either. Piled into the back of De la Rosa’s HRT at the first corner
Bruno Senna – Was off Maldonado’s pace but at least he brought the car home for a point.

Heikki Kovalainen – A stoic drive from Kovalainen brought Caterham the 13th place they needed to overhaul Marussia in the championship. Struggled in the late-race rain, losing heat in his brakes and tyres, and had to pit for a new front wing after clashes with Button and Perez, but brought the car home.
Vitaly Petrov – Picked up damage early on so pitted for a new front wing, falling to last. Later retired with an electrical fault. Pedro de la Rosa – Said he doesn’t enjoy Monaco and doesn’t think it’s safe enough for F1, so was perhaps not too disappointed to be taken out by Maldonado on the first lap.
Narain Karthikeyan – Comprehensively beaten by de la Rosa in qualifying to the tune of 1.2 seconds. Finished last, two laps down.

Timo Glock – Came very close to spoiling Caterham’s weekend when, with four laps to go, Kovalainen returned to the track less than a second in front of him. Had to settle for 14th – the time lost with a broken front wing early in the race proving costly.
Charles Pic – Infuriated his team mate in qualifying – Glock said Pic held him up – and retired with an electrical problem in the race.

Which driver do you think did the best job this weekend?

Cast your vote below and explain your choice in the comments.

Who was the best driver of the Monaco Grand Prix weekend?

An F1 Fanatic account is required in order to vote. If you do not have one, register an account here or read more about registering here.