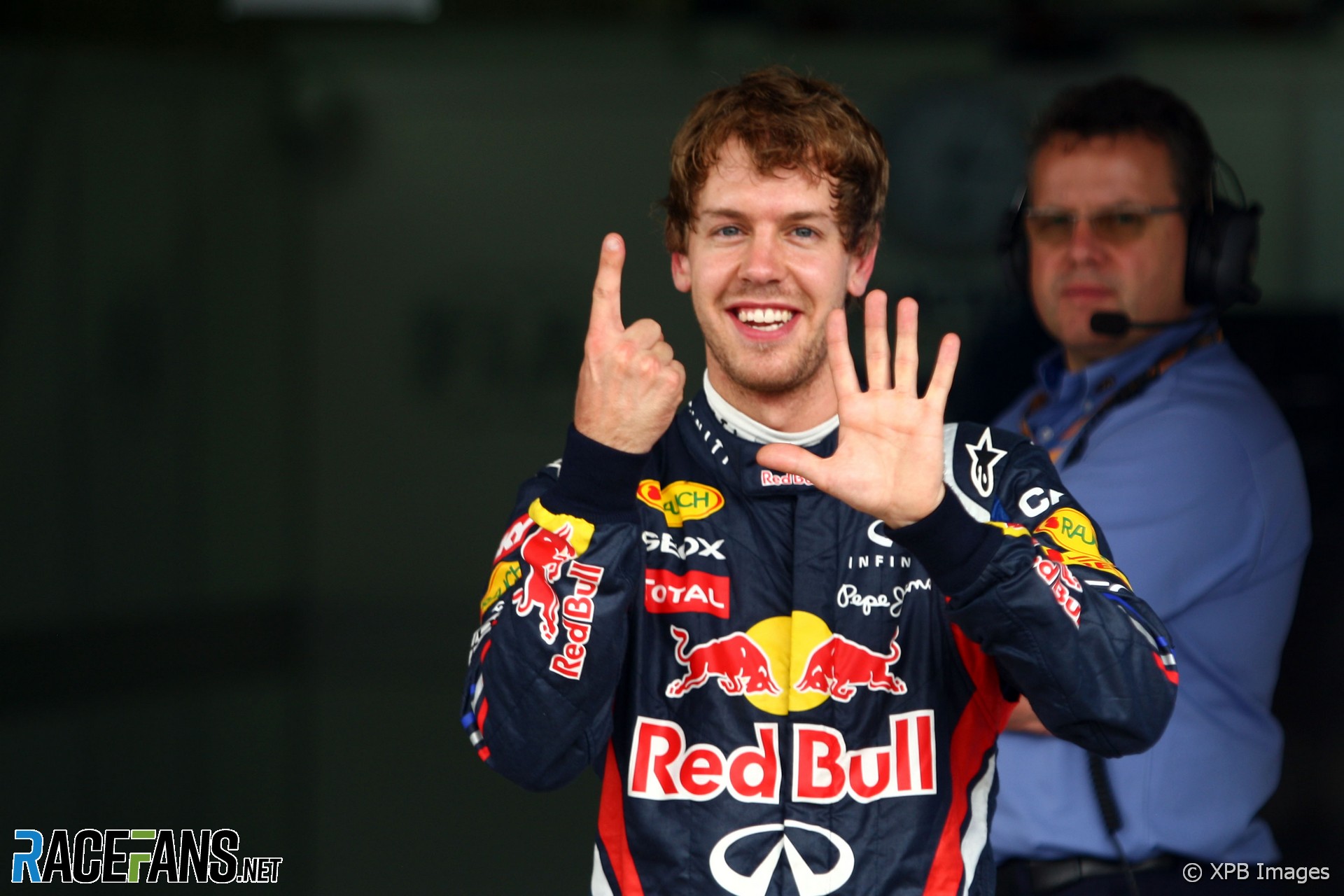 Sebastian Vettel set a new landmark with his 15th pole position of the season in qualifying for the Brazilian Grand Prix.

Team mate Mark Webber ran him close but Vettel had a tenth of a second in hand when it mattered in Q3.

The two McLarens share the second row of the grid.

Qualifying began in dry conditions at the Interlagos circuit, but with rain threatening the teams were quick to get the session started. Within a few minutes of the start all 24 cars were out on the track.

Despite Lotus’s hopes of challenging Williams, the usual three teams were eliminated in Q1. Unusually, both HRTs out-qualified the Virgins.

It came down to a contest between the Williams drivers to determine who would reach Q2. A late effort by Rubens Barrichello kept him safe from his team mate at his home track.

Still wary of the prospect of rain, the teams sent their cars out immediately as Q2 began.

Vettel set a 1’12.446 which no-one could get close to at first, and returned to the pits straight afterwards.

Nico Rosberg came closes, a 1’12.569 putting him second in the Mercedes. His team mate languished outside the top ten with his first run before doing a second to make the cut. Even so, he was over a second slower than Rosberg.

Schumacher made it through at the expense of Paul di Resta, while the other Force India of Adrian Sutil reached the top ten.

Felipe Massa was another driver who had to do another run at the end of the session as he came under threat of elimination. Despite an error in the Senna S, he secured a place in Q3.

Bruno Senna made it two home drivers in the final ten, making it through as team mate Vitaly Petrov dropped out.

By Q3 the teams had decided the rain wasn’t going to happen and the session followed a more typical pattern.

Vettel once again reeled off a lap that was instantly good enough to put him quickest.

Webber made it a Red Bull one-two while Button, Alonso, Hamilton and Rosberg took up the places behind them.

Vettel went out for a second run and found even more time – delivering a lap of 1’11.918. He needed to, as team mate Webber got within a tenth of a second with his final run, confirming the Red Bull lockout of the front row.

The two McLarens line up behind them, Button in front of Hamilton, followed by Alonso and Rosberg.

Massa and Sutil shared the fourth row in front of Senna and Schumacher – the latter not setting a time, just touring the track on medium tyres having run out of softs.