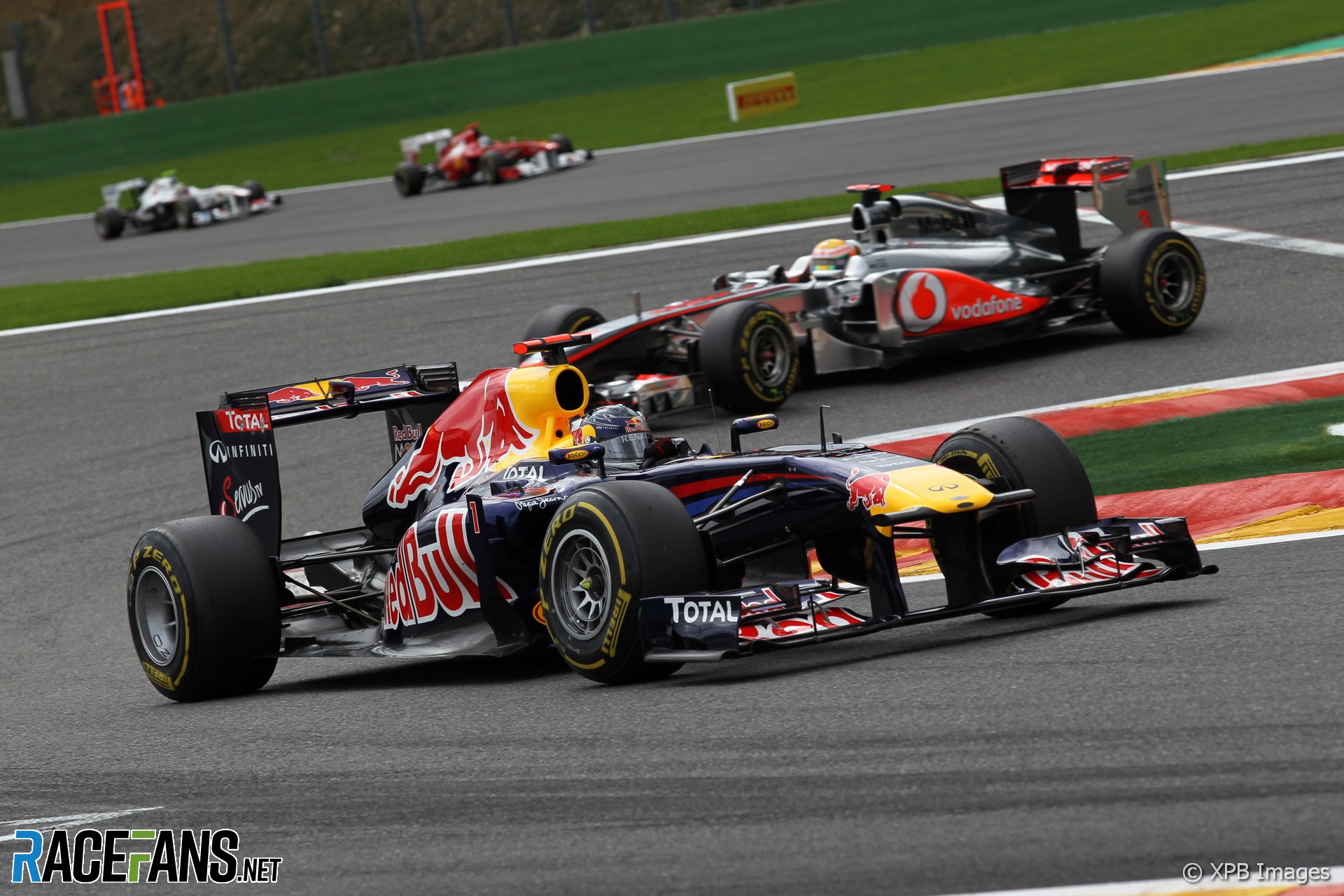 But it wasn’t a straightforward victory for the Red Bull driver who dropped back after an early pit stop.

Mark Webber bounced back from a poor started to finish second while Jenson Button fought his way up from 13th to third.

Vettel held the lead at the start but it was Nico Rosberg, whose Mercedes was visibly smoking as the lights went out, who sprinted forward. He arrived at the first corner in second place, then nabbed the lead off Vettel at Les Combes.

Behind them the two Ferraris had also made excellent starts. Felipe Massa took third off Hamilton and Fernando Alonso also put the McLaren driver under pressure, despite being knocked wide at La Source by an incident behind him.

Alonso got past Hamilton on the second lap before DRS was activated, the McLaren clearly struggling for straight-line speed.

When DRS was activated, Vettel reeled in Rosberg and moved into the lead. But it was short-lived.

Red Bull had been concerned about the state of their tyres which had blistered in qualifying. Webber came in after four laps and Vettel one lap later.

Rosberg took the lead back for one lap before being passed by a series of drivers using DRS.

First came Alonso, who had passed team mate Massa at Rivage on the previous lap. Next was Hamilton, who had followed Alonso past Massa.

Alonso relinquished the lead after one lap, pitting and allowing Hamilton into first place. He came out ahead of Webber, but the Red Bull driver thrust past with a stunningly brave move as they hurtled side-by-side into Eau Rouge.

After two laps in the lead Hamilton came in for his pit stop. He came out in eighth place behind Kamui Kobayashi and Adrian Sutil.

He picked Sutil off with ease but his battle with Kobayashi ended with his second controversial collision of the weekend.

Hamilton passed Kobayashi, who was nursing a damaged front wing, and still had his DRS open as they headed towards Les Combes. Given that, he might not have expected the Sauber driver to attempt a pass on the way into the corner.

But Kobayashi had not dropped back fully, and as Hamilton moved towards the racing line they touched.

The contact fired Hamilton into the barrier at speed, destroying and advertising hoarding before coming to rest. Kobayashi continued, and the safety car was summoned as Hamilton climbed from the wreckage.

The safety car was good news for Vettel, who was able to get his second pit stop in while the cars were running at reduced speed. That put Alonso back in the lead of the race.

Webber did not make another stop and briefly held second, but once the safety car came in Vettel quickly passed his team mate. On the next lap he took Alonso again for the lead.

Button races to the podium

Jenson Button had picked up front wing damage early in the race which delayed his progress from 13th on the grid. But once the safety car came in he made rapid progress.

Button passed Michael Schumacher, Adrian Sutil, Felipe Massa and Nico Rosberg for fourth place. He kept the leaders within range so that when Vettel pitted, he came out behind Button.

The McLaren was never going to keep the Red Bull behind, however, and Vettel was quickly through into the lead.

Button joined Alonso and Webber in making a final pit stop. Now on medium tyres, Alonso struggled for pace and first Webber then Button came past him.

Would Red Bull order their drivers to hold position? It turned out to be a moot point, as Webber wasn’t able to catch Vettel.

While Button was passing Alonso for third, Rosberg was under attack from his team mate. Remarkably, Schumacher had climbed from 24th on the grid to pass his team mate for fifth.

Sutil was seventh ahead of Massa, whose race was spoiled by a puncture which forced him to make an extra pit stop. He started the last lap in ninth, but gained a place from Vitaly Petrov who slowed on the final lap.

Pastor Maldonado claimed the final point for Williams – the first of his F1 career.

Paul di Resta was 11th, having lost part of his front wing at the first corner when he was hit by Timo Glock. Behind him was Kobayashi.

Bruno Senna finished his first race for Renault in 13th, having made the same mistake as Glock on the first lap and also been handed a drive-through penalty.

The other Toro Rosso of Sebastien Buemi was also taken out after being hit by Sergio Perez.

Rubens Barrichello fell to 16th after hitting Kobayashi at the chicane late in the race.

Behind him were the Virgins of Jerome d’Ambrosio and Timo Glock, with Vitantonio Liuzzi the last runner.

Vettel’s latest victory means he has accrued more points in 12 races in 2011 than he did in the whole of 2010.

Although it will take him a few more races to put the title beyond doubt, Red Bull’s perfect result at a track which has not favoured them in the past makes the destiny of the championships all but inevitable.