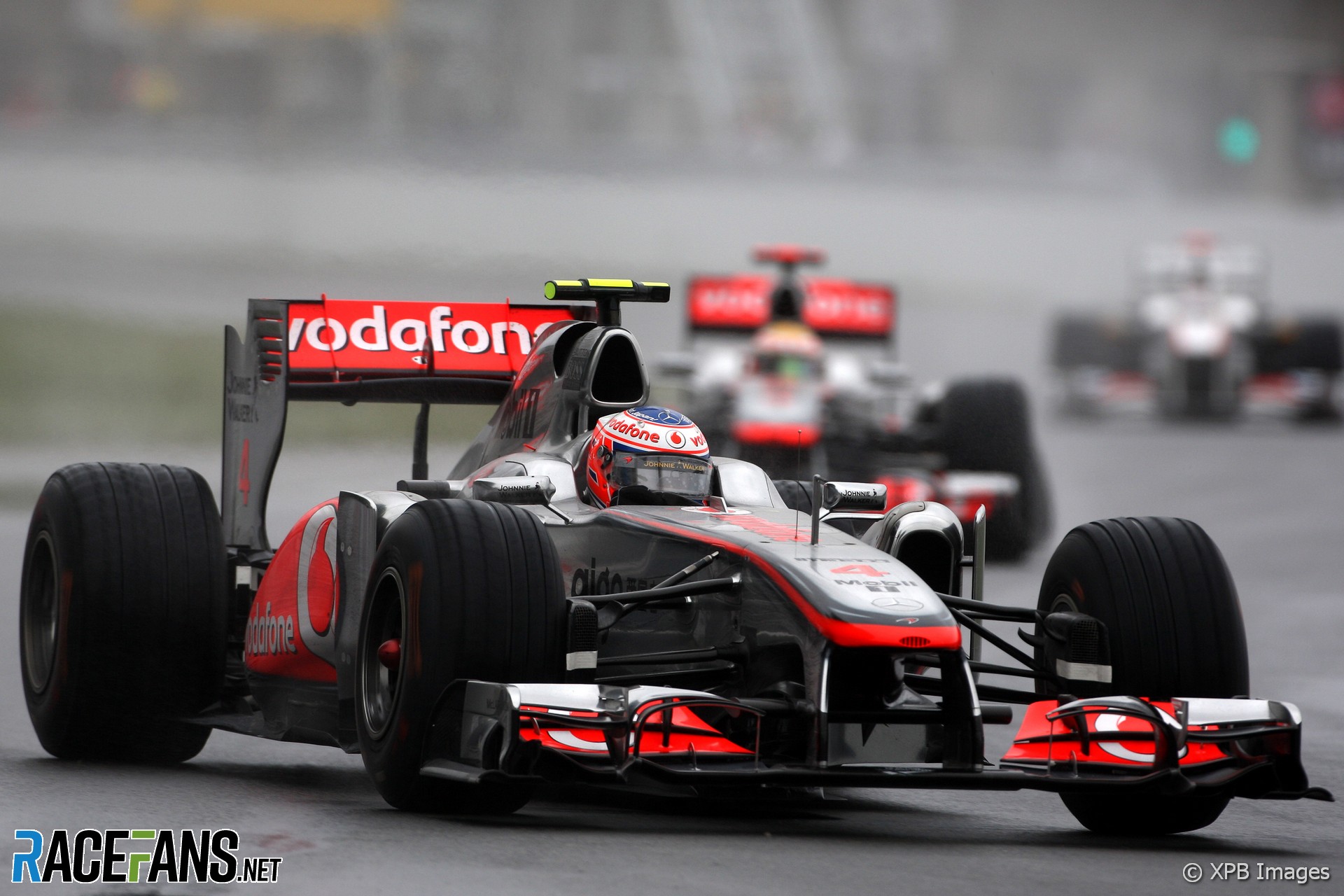 He bounced back after two collisions, with Lewis Hamilton and Fernando Alonso, and a drive-through penalty.

A last-lap mistake by Vettel allowed Button to win having run 22nd at one point.

The rain had stopped before the race got underway but Charlie Whiting decided to start the race behind the safety car on the wet track. The cars circulated for four laps before the pack was released.

Sebastian Vettel came under attack from Fernando Alonso immediately but he repelled the attack.

Further back Mark Webber was attacked more aggressively by Lewis Hamilton, who tipped the Red Bull into a spin at the first corner.

Hamilton fell behind Michael Schumacher while avoiding Webber’s spinning car but was soon on his tail, trying to pass the Mercedes around the outside of the Casino hairpin.

Schumacher edged him wide and Button seized the opportunity to move ahead of his team mate.

Hamilton’s eventful race came to a sudden end on lap seven. He tried to capitalise on a mistake by Button at the chicane, but drew alongside his team mate into a narrowing gap between Button and the pit wall. Hamilton dealt the wall a solid whack, damaging his left-rear wheel.

McLaren told Hamilton to park his damaged car, and while Button headed for the pits the safety car returned to the track.

That promoted Kamui Kobayashi to sixth place, having made rapid progress from 13th on the grid.

At the restart Alonso began to slip back from Vettel, as he had during the first three laps of green flag running, with Felipe Massa lapping close behind his team mate.

Having switched to intermediate tyres, Button quickly picked off Pastor Maldonado and Paul di Resta. But he was summoned to the pits for a drive-through penalty for going too quickly behind the safety car.

He served the penalty immediately, losing just five places, which he quickly began to take back. Noting his progress on the intermediate tyres, several other drivers reacted.

Among them was Alonso, who emerged from the pits with just one car between him and Button. The two Mercedes also made the switch.

But they were caught out when the rain returned with a vengeance on lap 19. The safety car came out immediately and all the drivers who had switched to intermediates pitted for wets with one exception – Adrian Sutil.

After just two laps behind the safety car, with the weather radars showing much more rain to come, the race was red-flagged.

The race remained under suspension for over two hours as rain lashed the Circuit Gilles Villeneuve. Finally the clouds lifted and the race resumed behind the safety car.

Another eight laps behind the safety car passed as the track conditions improved. So much so that when the start was finally given some drivers immediately switched to intermediate tyres.

Vettel held his lead from Kobayashi, who had risen to second ahead of drivers who had pitted for intermediate tyres, plus Massa who had stopped for more wets behind the second safety car. Kobayashi fended off an attack from the Ferrari as the race resumed.

Jenson Button was one of the first drivers to switch to intermediate tyres. The Ferrari drivers pitted at the same time and Alonso had to queue behind his team mate.

Button made to pass Alonso at turn three but the pair banged wheels, sending Alonso spinning onto a kerb where his car became stuck. Button limped into the pits with a front-left puncture as Bernd Maylander took the safety car out for the fourth time.

The remaining drivers completed their switch to intermediate tyres and Vettel led once more as the race restarted.

Michael Schumacher was the man on the move at the restart, taking Webber for sixth.

That became fifth when Paul di Resta hit Nick Heidfeld, damaging his wing and stopping for repairs. He was later given a drive-through penalty.

Schumacher made a much more successful pass on Heidfeld and set off in pursuit of Kobayashi and Massa. He took both in a brilliant, opportunistic move on lap 50 when Kobayashi ran wide. Massa also moved ahead of Kobayashi.

By now drivers were pitting for slick tyres including Button, who had only just caught the pack in time for the restart. His pace on the super-soft tyres was whole seconds faster than Vettel’s, never mind the other cars, and he sliced past Heidfeld and Kobayashi for fourth, having been as low as 22nd.

Heidfeld mounted an attack on Kobayashi, but lost his front wing running into the Sauber at the Senna hairpin. The wing collapsed under the Renault and Heidfeld hurtled down the escape road at turn three.

He was unharmed, but with debris all over the track the safety car had to be summoned for a fifth time. During the interruption there was a frightening moment as a marshal fell over in front of de la Rosa and Petrov, who had to take avoiding action.

As the safety car came in for the final time the race clock threatened to bring the race to an end before the 70 laps were completed. The full distance was completed, but only just.

Vettel pulled away from Schumacher, Webber and Button at the restart, the latter briefly delayed by Timo Glock’s Virgin.

Webber made a few fruitless efforts to pass Schumacher, having to yield his position back at one point. On lap 63 he skidded at the exit of the final chicane and Button pounced for third place.

Button set off after Schumacher and took him on the very next lap. Webber would also demote Schumacher from the final podium position with three laps to go.

But all eyes were on the battle at the front. Vettel picked up the pace but Button continued to take several tenths of a second out of his lead per lap. On the penultimate lap he was able to use his DRS and take more time out of Vettel’s lead.

The pair began the final lap with Button within a second and poised to pounce in the DRS zone. But it was decided before then: Vettel put two wheels on the still-damp surface at turn six and slewed sideways, allowing Button through to claim an improbable win.

Massa, who had been delayed after spinning and breaking his front wing, passed Kobayashi at the line for sixth place.

Both Toro Rosso scored points: Jaime Alguersuari in eighth, Sebastien Buemi in tenth, with Rubens Barrichello in between.

Vettel looked despondent after losing the lead he had held for almost the whole race. But he retains a healthy 60-point margin over Button, who is now second in the title race.