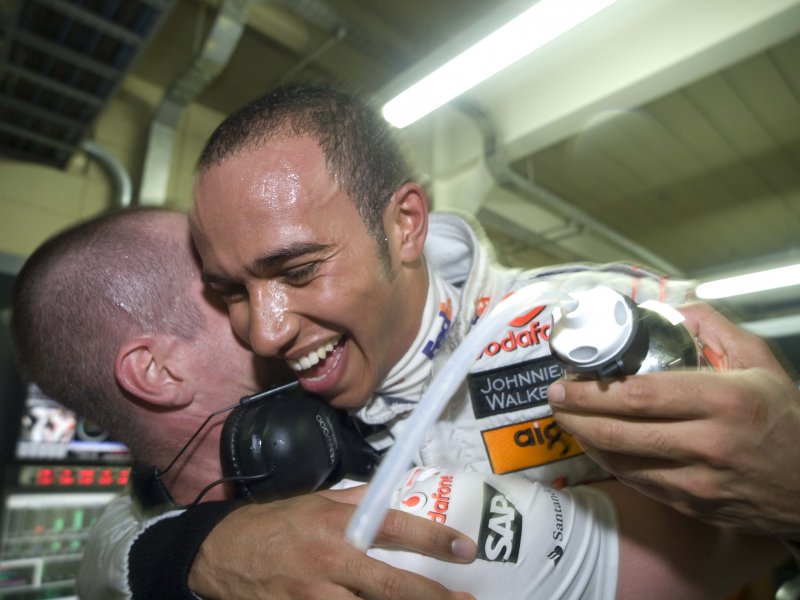 Lewis Hamilton became F1’s youngest ever world champion as the destiny of the 2008 title switched between him and rival Felipe Massa on the final lap of the Brazilian Grand Prix.

In Massa was already over the finishing line when Hamilton took a crucial fifth place of Timo Glock as the German driver struggled on dry weather tyres as rain fell.

That gave Hamilton the priceless point he needed after 71 laps of incredible tension.

The race began and ended in unpredictable fashion – rain fell three minutes before the intended start. Race control delayed the start for ten minutes while almost every driver switched from dry to wet-weather tyres.

The only exception was Robert Kubica – but at the end of the formation lap he realised his mistake and pitted to take on dry weather rubber.

The top four got away cleanly – Felipe Massa held Jarno Trulli at bay at the first corner, and Heikki Kovalainen gave room to team mate Lewis Hamilton, allowing him to keep a hold on fourth. But behind the Finn Sebastian Vettel and Fernando Alonso attacked, dropping him to seventh.

Nico Rosberg went deep into the first corner and slithered into the side of David Coulthard. It pushed the Red Bull into Rosberg’s team mate Kazuki Nakajima, but although the Japanese driver was able to continue, Coulthard’s final Grand Prix was over. Nelson Piquet Jnr didn’t make it past the first lap either – and it could prove his last F1 race too.

The safety car came out and after the pit lane opened Giancarlo Fisichella gambled on an early switch to dry weather tyres. It worked brilliantly, vaulting him up to fifth after everyone else had changed tyres.

Vettel and Alonso did so on lap nine, but Massa waited one lap later. This proved crucial as Hamilton waited until Massa had pitted to react, shadowing his title rival’s move. But having waited two laps longer than the drivers behind him to pit he lost position to both of them.

McLaren brought Kovalainen in on the same lap as Massa, after the Finnish driver had scrambled past Alonso at the restart only to lost the position again by running wide.

After the drivers had completed their change to dry weather tyres Massa resumed the lead from Vettel and Alonso, with Raikkonen down to fourth. Hamilton passed Trulli when the Italian went wide at turn one, and now the McLaren driver found the fifth place he needed occupied by Fisichella.

Hamilton bided his time as the track remained very slippery off-line. Finally on lap 17 he gingerly took the inside line away from Fisichella at the entry to the S do Senna. He was back in fifth place – and the title was back within reach.

Vettel had a crucial role to play later in the race in almost costing Hamilton the title. But for now, with a light fuel load, he was throwing everything he had at Massa. It was to no avail, and on lap 27 Vettel pitted – 11 laps before Massa needed to – wrecking Vettel’s hopes of repeating his Monza win.

That left Massa with a 4.1s lead over Alonso and the Renault driver’s hopes of beating the Ferrari took a battering when, on lap 34, Massa unleashed a lap of 1’13.755, almost half a second than anything so far in the race.

Alonso had a ten second advantage over Raikkonen, who in turn had five seconds on Hamilton, who was now up to fourth. Glock was now threatening Hamilton, but his pit stop on lap 36 removed the pressure.

Massa pitted two laps later and took on enough fuel to last him until the end of the race. The rest did likewise – but most of them would end up coming back in one more time.

Alonso and Hamilton pitted together on lap 40 – Hamilton now so far behind that he only arrived in the pits as Alonso was leaving. Vettel staved off his final pit stop until lap 51, and that dropped him from second to fifth, behind Hamilton.

The middle part of the race had been quiet, even processional. But the first hints that was about to change came as the teams woke up to the likelihood of a second, late rain shower.

As rain began to fall on lap 63 Massa led Alonso, Raikkonen and Hamilton. The McLaren driver had only one second’s advantage over Vettel, but he knew that even if he lost the place he would still be champion.

Some drivers switched to wet weather tyres as early as lap 64. Nakajima and Fisichella were the first ones in. Two laps later the leaders took the gamble: Alonso and Raikkonen darted for the pits. Then the Hamilton-Vettel battle for fourth appeared in pit lane as one – Hamilton breaking out of his pattern of mirroring Massa.

Massa was in on lap 67, with four remaining. Now everyone had pitted except the two Toyotas – and this was crucial, because now Glock was ahead of Hamilton.

After his early tyre blunder Kubica was fighting back and on lap 69 he unlapped himself from Vettel. Then he did the same with Hamilton, forcing the McLaren wide at Junaco. This was disastrous for Hamilton – as Vettel followed Kubica through to take fifth.

Hamilton was now demoted to sixth and staring championship defeat in the face. Around the final two laps Vettel’s Toro Rosso was tantalisingly out of reach.

On the McLaren radio Martin Whitmarsh was telling Hamilton to keep it cool – because the Toyotas were starting to struggle. His problem was Glock was coping with the conditions far better than Trulli – lapping five seconds faster than his team mate on lap 70.

But the 71st lap proved one too many for them. Robbed of tyre temperature and grip, the two floundered to the line. First Vettel, then Hamilton reached Glock in the final sector of the final lap – and both drove past him with ease.

As Massa crossed the finish line the Ferrari pit and the crowd erupted in celebration. But the cheers stopped as Vettel and Hamilton headed for the line with Glock in their mirrors: Vettel fourth, Hamilton fifth – and world champion by a single point.

Massa could scarcely hold back the tears on the podium – but he was weeping with sadness, not joy. Not his home victory nor Ferrari’s 16th constructors’ title could ease the pain of having the drivers’ championship torn from his grasp at the last gasp.

He was flanked by Alonso and Raikkonen. Glock held on to sixth ahead of Kovalainen – so his gamble actually paid off – and Trulli took the final point ahead of Mark Webber. Nick Heidfeld completed the top ten.

Kubica finished 11th ahead of Rosberg, Button and Bourdais – the latter losing a potential points finish after a lunge by Trulli forced him off the track at turn one. Revenge for Shanghai? Perhaps, but unlike Hamilton at Fuji, there was no punishment for Trulli.

Barrichello finished what could be his final race in 15th, ahead of Sutil, Nakajima and Fisichella.

In the pits Hamilton and McLaren were celebrating. Their driver hadn’t realised he was champion until well after crossing the finish line – but as the shell shock he wasted no time in catching up with the celebrations. He wasn’t the only one left reeling by this flabbergasting end to the season.