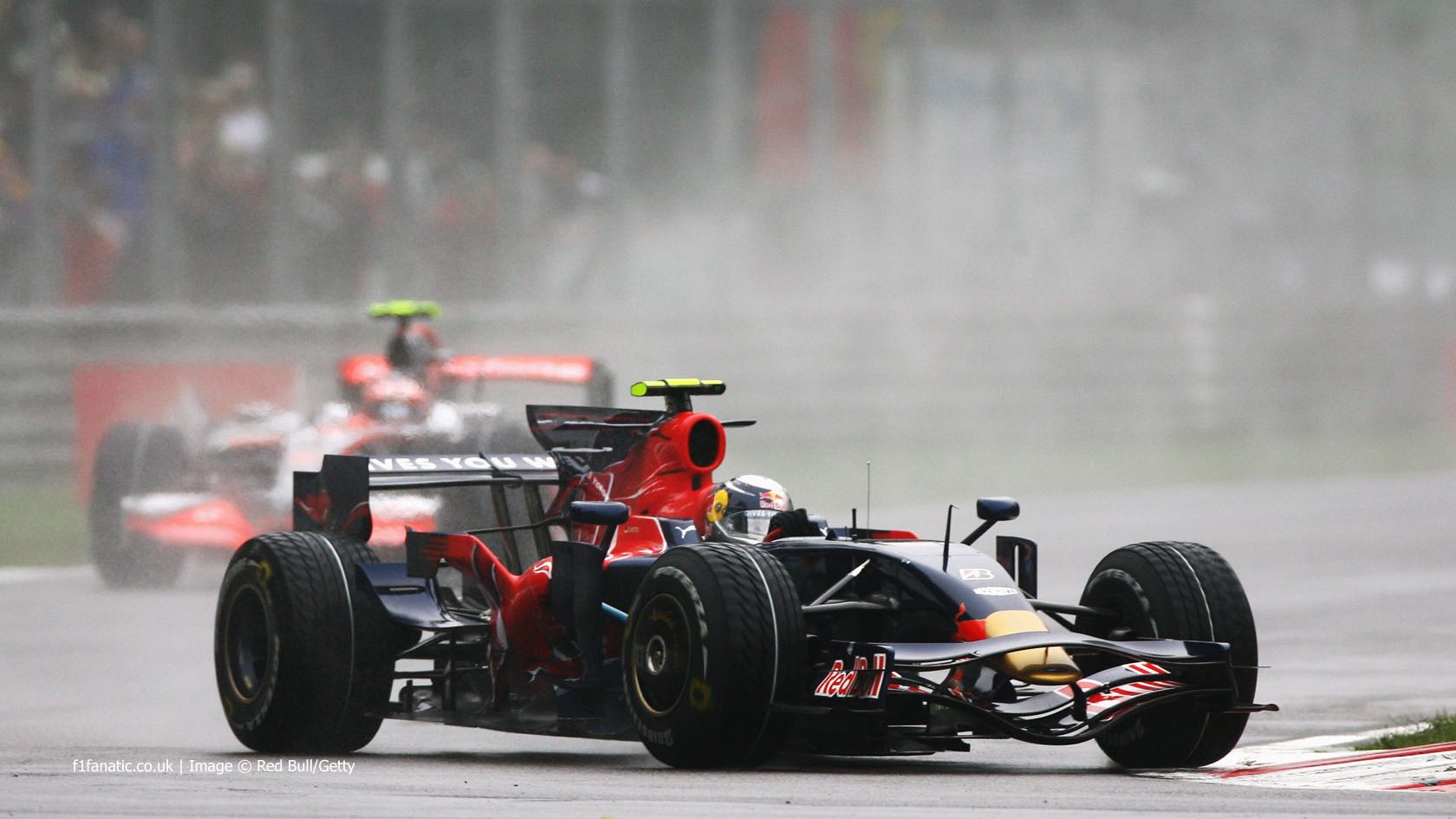 Sebastian Vettel announced his arrival as a force in F1 with a masterful win in slippery conditions in the Italian Grand Prix. He led from the start on the wet track and held the lead for most of the race, switching from extreme wet tyres in the later stages.

Meanwhile the championship rivals struggled: Felipe Massa finished where he started, sixth, with Lewis Hamilton right behind him having started 15th, and Kimi Raikkonen ninth from 14th.

Vettel led the field away from pole position as the race began behind the safety car. While Kazuki Nakajima and Jenson Button started from the pits, Vettel’s team mate Sebastien Bourdais was out of luck, being stranded on the grid with a problem. He eventually got away one lap down.

The first few laps were tentative as the drivers struggled to get a feel for the conditions. Most of them were very heavily fuelled, but as the surface water washed away and the fuel loads came down the race came to life.

Having started near the back, Raikkonen and Hamilton were queued behind David Coulthard and Giancarlo Fisichella in a four-way battle for 11th. Coulthard dropped behind the trio and Raikkonen began attacked Fisichella, finally passing the Force India on lap eight. Hamilton followed him the next time around.

But by this stage they were already over half a minute behind the flying Vettel, who in the opening stages had dropped Heikki Kovalainen by up to two seconds per lap. By lap nine Kovalainen was only losing a few tenths to Vettel, but even so the gap grew from 6.4s to 11 over the next eight laps. Vettel was accurate and quick, and only seemed to miss a chicane once, at the Variante Della Roggia on lap six.

Hamilton goes on a charge

By this stage Hamilton was coming to life and after picking off Fisichella was quickly with Raikkonen. On lap 10 he got a better run out of the Della Roggia and neatly out-braked Raikkonen into the first Lesmo.

He passed a car per lap from laps 14-16, taking Nick Heidfeld, Timo Glock and Robert Kubica to get into the top eight. He also slashed his deficit to Massa, while leaving Raikkonen trailling.

Vettel pitted from the lead on lap 18, coming out behind Massa. Massa had passed Nico Rosberg for fourth at his second attempt, having done so by cutting a chicane the first time and yielding the place back.

The prospect of an edgy battle between Hamilton and Fernando Alonso for seventh amounted to nothing. Hamilton was over two seconds per lap quicker than the Renault and Alonso saw the futility of offering any more than token resistance, even to his arch-nemesis.

Glock was making rapid progress as well despite having lost a position to Robert Kubica by spinning on lap six. He took ninth off Kubica on lap nine and went past Alonso the next time by as well.

Hamilton’s progress was briefly halted by Jarno Trulli on lap 21 as the McLaren driver cut the chicane. bearing in mind the ‘clarification’ of the contentious rule after Spa, Hamilton gave the position back, and took care not to pass Trulli at the following corner. The next lap, however, he was past.

The following lap Kovalainen, Massa and Mark Webber pitted from first, second and third respectively, putting Vettel back in the lead. That promoted Hamilton to second as he tore seconds out of Vettel’s lead with each lap. Massa came out of the pits behind Heidfeld, and was stuck with the BMW for a couple of laps, losing precious time.

Trulli and Raikkonen came into the pits on lap 26 and, although the rain had stopped some time ago and the track was drying, they followed everyone else’s lead by taking a new set of extreme wet tyres. Hamilton did the same when he came in on the next lap.

On the very next lap David Coulthard came in and switched to the ordinary wet tyres. When he went back out onto the track he skated past the first corner with his front wheel locks, but that didn’t discourage Renault who put Alonso on the wet tyres on lap 30. Alonso, he feel for tyre temperature always strong in these conditions, was soon lapping at similar times to everyone on the extreme wets.

The forecast claimed heavier rain was on the way but only a few drops arrived – not enough to keep life in the extreme wets. One by one the leaders surrendered to the inevitable and came in for standard wets – some of them having pitted just a handful of laps earlier and having fuelled to the end.

Massa made the switch on lap 33, one lap before Kovalainen and Webber. That allowed him to take advantage of Webber and pass the Red Bull driver, who then spun at the exit of Ascari.

Of the one-stoppers BMW called the conditions best, as Kubica came in for his single stop on lap 34 and switched to the intermediate tyres, leaving the pits in third place. It also played into Vettel’s hands beautifully, as he was fuelled to make a second stop anyway, and he didn’t even lose the lead when he pitted on lap 36.

Raikkonen finds pace too late in the race

Hamilton came back in on the same lap, have waited three laps longer than Massa. He came out behind Webber and pounced immediately, taking seventh place. Massa was now getting stuck into Heidfeld and by lap 38 Hamilton had caught them, the trio covered by just over a second.

But Hamilton was struggling to make his shallower-grooved wet tyres last, and dropped back briefly from Massa. That allowed Webber to get a run on him again, and the pair banged wheels at the first chicane, Webber cutting the corner but letting Hamilton pass again.

Raikkonen now finally found some pace, rather as he had when the track dried at Silverstone. He set a string of fastest laps and began moving through the field, taking Nakajima for 13th on lap 46. As several more drivers in front of him pitted he moved into tenth before demoting Nelson Piquet Jnr for ninth. Piquet, as at Hockenheim, was the last man to pit for fuel and it helped him move up the order, but there were no points on offer for him this time.

Had the race been a few laps longer the flying Raikkonen would have reached the Heidfeld/Massa/Hamilton/Webber train, but it wasn’t to be. If he gambled on a dry weather set-up, it didn’t pay off, and for the third race in a row the world champion failed to score.

But Vettel produced a drive of such calm, mature composure he looked like a man with dozens of F1 wins already to his name – in fact, he is the youngest person to win an F1 race, by almost a whole year.

Kovalainen was an unhappy second, no doubt well aware that an awful lot more was expected of him given where he started. Kubica kept himself well in the championship hunt with a calm and tactically astute drive to third.

Fernando Alonso’s wet tyre gamble paid off and he delivered fourth. Behind him were Massa, Hamilton and Webber each with a few seconds of each other. Massa has now cut Hamilton’s title lead to a single point.

Behind Raikkonen and Piquet were the Toyota-powered quartet of Glock, Nakajima, Trulli and Rosberg. The latter was badly caught out by the timing of his pit stops and a problem getting away on his first visit to the pits.

Jenson Button was the last unlapped driver, ahead of Coulthard who had a late collision with Nakajima, spreading debris across the track which was hit by Massa. Barrichello was 17th after a late switch to dry-weather tyres failed to pay off.

Bourdais, 18th, must have been crushed, knowing that his seat was on the line before this race. Adrian Sutil was 19th and Fisichella was the only driver not to finish – he had nudged the back of Coulthard’s car, loosening his front wing, and ploughed straight into the barriers at Parabolica when the wing broke free.

Sebastian Vettel was the man of the weekend. He was very quick throughout qualifying and was every bit as impressive in the wet as he had been at Fuji last year – up until that fateful collision with Webber. This exceptional win will have banished all memories of that. And now he will join Webber at Red Bull in 2009 as a race winner.

65 comments on “Sebastian Vettel brushes title rivals aside to win”