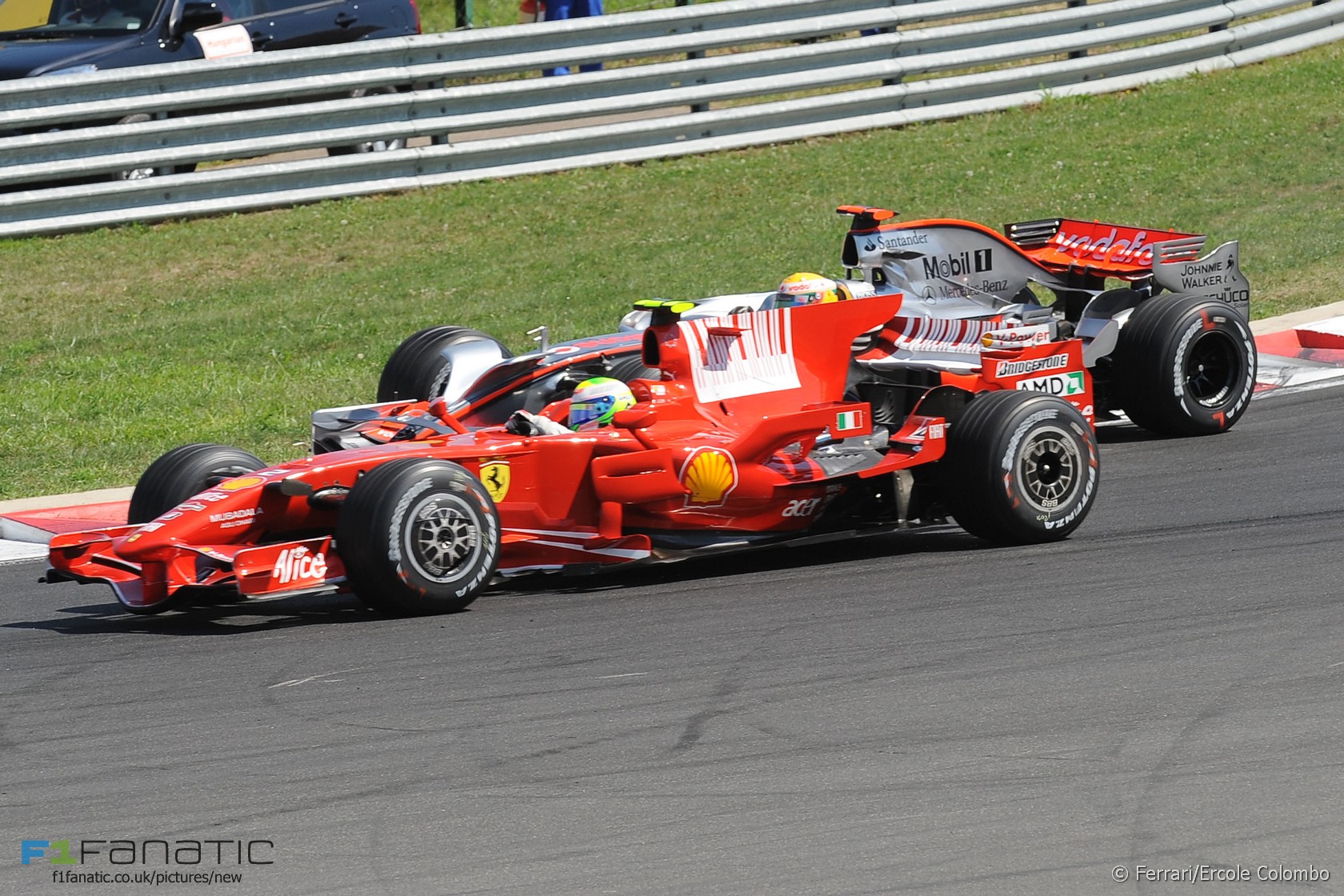 Felipe Massa was three laps away from victory in the Hungarian Grand Prix – and the lead of the world championship – when a shock engine failure ended an excellent drive.

Massa had muscled his way past Lewis Hamilton at the start and had been poised to take seven points off the McLaren driver who had fallen to sixth after a puncture.

But Hamilton kept his championship lead while team mate Heikki Kovalainen seized the opportunity to score his maiden win.

McLaren had the front row to themselves but it was a Ferrari that reached the first corner first – Massa’s. He out-dragged Kovalainen and Lewis Hamilton before passing Hamilton around the outside of the first corner – some payback for their brief encounter at Hockenheim.

Race day had brought hotter temperatures and the Ferraris seemed to cope with them much better than the McLarens did. Massa eked out an advantage over Hamilton, tenth by tenth, until his lead reached three seconds by lap 17.

But the other Ferrari was stuck. Starting sixth on the dirty side of the grid, Kimi Raikkonen could do nothing to keep Fernando Alonso from passing him at the start. He spent the first stint staring at the rear of the Renault, usually about one second behind, while Alonso dropped back from Timo Glock and Robert Kubica in fourth and fifth.

Alonso lost so much time that when Massa made his first stop on lap 18 he came out of the pits ahead of the Renault drier, with Raikkonen still tucked up behind him. Hamilton went one lap further before pitting, but re-joined the race behind Raikkonen.

Fortunatley for him Alonso and Raikkonen pitted together on lap 21, heaving him around three seconds behind Massa, just as he had been before the pit stops. And McLaren reckoned he had a few extra laps’ worth of fuel to give him a chance of passing Massa at the final round of pit stops.

That was the theory, but they didn’t get the chance to put it into practice. On lap 41 Hamilton’s front left tyre deflated at the very first turn, forcing him to do an entire lap on a punctured tyre, and then do a 29-lap stint on the super-soft tyres they were trying to use as little as possible. He fell to tenth.

Afterwards McLaren said the failure had been caused by debris and Bridgestone took the tyre away for further analysis. (At the time of writing they have not stated conclusively what the problem was but did say: “a puncture from a sidewall cut looks to be the probable cause.”)

Ferrari reacted by pitting Massa as soon as he could take enough fuel to reach the end of the race, to protect him in the event of the safety car appearing. Kovalainen had been over 15 seconds behind, and thus no longer a threat.

Raikkonen days went from bad to worse as he failed to get past Alonso at the first round of pit stops. The drivers came in together and Alonso revved his engine impatiently as the Renault team finished refuelling him.

He rejoined the pit lane with Raikkonen right behind him and condemned to another stint stuck behind the Renault.

The pair did gain a position at the expense of Robert Kubica, who suffered a slow pit stop. Sebastien Bourdais and Rubens Barrichello ran into more serious problems, however, as both suffered brief fires during their pit stops – Bourdais twice.

It was for the most part a typically processional Hungarian Grand Prix with no-one able to get close enough to anyone else to make a pass. Once the first lap was done with their was very little overtaking at all, besides Jenson Button picking off his Honda team mate Barrichello on the second lap.

Raikkonen finally got past Alonso at the second set of pit stops by running one lap longer (despite a lurid slide at turn two on lap 49) and then quickly cut the gap to Timo Glock. With seven laps to go he was on the back of the Toyota but it was clear to see how hard it is for one F1 car to follow another. Having been over a second per lap quicker than Glock, Raikkonen couldn’t get close enough to make a move.

Then on lap 67 came a thunderbolt from a clear sky: with a sudden gush of smoke Massa’s Ferrari was coasting to a halt on the pit straight. The shock retirement handed the win to a surprised Kovalainen – his first victory.

Althought Raikkonen, unlike Massa, was using a new engine for this race, he backed off from his pursuit of Glock and took third place.

Alonso was fourth having been pursued by Hamilton, with Nelson Piquet Jnr in sixth making it a double points haul for Renault. Jarno Trulli and Robert Kubica were the last two points scorers.

Mark Webber was the best Red Bull in ninth as the team failed to score for the third race in a row, David Coulthard 11th. Nick Heidfld finished tenth after starting 15th.

Jenson Button started where he finsihed with 12th after losing ground at the start of the race. A change of Kazuki Nakajima brought Kazuki Nakajima 13th ahead of team mate Rosberg, another driver who suffered fuel rig problems.

Giancarlo Fisichella was 15th ahead of Barrichello. Massa was classified 17th, three laps down, but ahead of Bourdais who was still running after two pit fires plus an extra stop to clear extinguisher foam from his visor.

F1 takes its annual three-week break now before the first race at a new venue – the European Grand Prix at the Circuito Urbano Valencia. For a sneak preview of the track, have a look at these links: