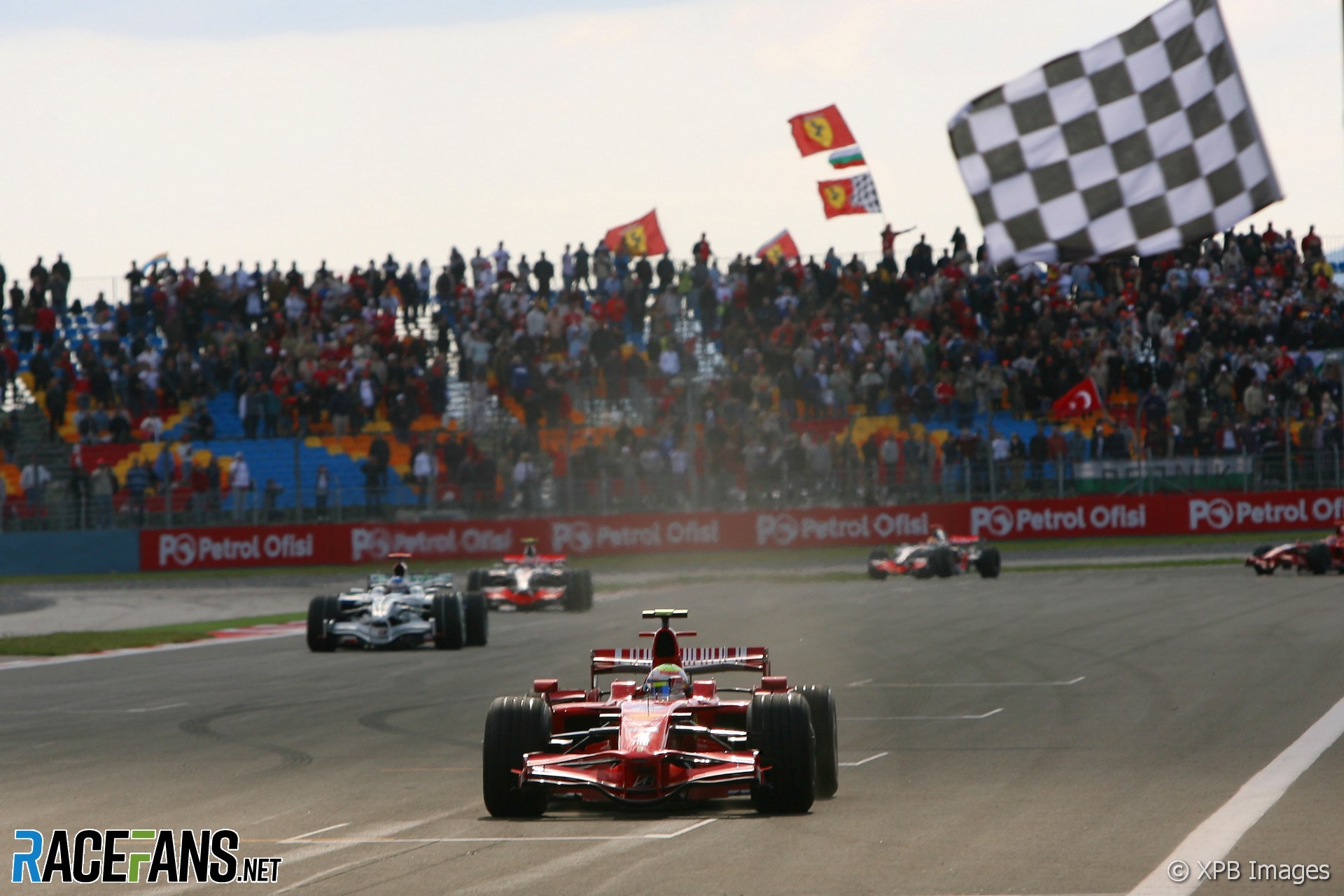 Felipe Massa remains the man to beat at Istanbul after his third win from pole position at the track in as many years.

But he was chased all the way and even headed for a while by the McLaren of Lewis Hamilton. Kimi Raikkonen finished third after run-in with Heikki Kovalainen at the first corner. The contact left Kovalainen with a flat tyre that dropped him to the back of the field and cost him a chance of a maiden victory.

It looked like business as usual at Istanbul for Massa when he converted pole position into the lead at the start of the race as the chasing field funnelled through the first corner.

Sadly for Giancarlo Fisichella his Istanbul race also ran true to form as he crashed on the first lap for the third year in a row. He misjudged his braking point for turn one and slammed hard into the back of Kazuki Nakajima, vaulting over the top of the Williams. Nakajima limped back to the pits but could not continue.

The drivers on the clean side of the grid had generally gotten much better starts. Hamilton and Robert Kubica converted third and fifth into second and third respectively. Raikkonen tried to pass Kovalainen at the entry to turn one but the McLaren driver crowded him out and the pair made the briefest of contact.

Kovalainen headed for the pits while Raikkonen pressed on, the wing slightly damaged but staying in one piece. It certainly didn’t stop him slipstreaming past Fernando Alonso for fourth on lap three with little difficulty.

Also pitting were Adrian Sutil and Sebastian Vettel. The former German had damaged his front wing and the latter picked up a puncture, although he was probably relieved at having made it to the end of the first lap in one piece for the first time since the Malaysian Grand Prix.

Massa pulled out a slight advantage over Hamilton in the early running but the McLaren driver reversed the trend with a string of quick laps of his own. On lap 16 we discovered why as Hamilton made a surprisingly early pit stop. It transpired he was running a three-stop strategy out of concerns from tyre supplier Bridgestone that he would suffer a failure of the type he had last year if he tried to do only two stops.

That left Hamilton needing to get ahead of Massa to build up a lead but he failed to do it at the first set of pit stops, Massa retaining the lead after his first pit stop. Hamilton had needed to start first, not third, and being out-qualified by both Massa and his team mate despite both carrying more fuel suggests the race was his to lose.

He did his best two make amends however, catching and passing Massa on lap 25. This gave him the lead, Raikkonen having pitted shortly after setting the fastest lap of the race despite his handicap. He moved up to third at the expense of Robert Kubica.

Now Hamilton let rip, up to seven-tenths of a second quicker per sector at times, as he fought to build up an advantage over the Ferraris.

Meanwhile Kovalainen had caught up to the rear of the field and was making his way towards the front. Nelson Piquet Jnr helpfully under-steered wide at turn 12, letting the McLaren through. Others were tougher: Timo Glock and Nico Rosberg, hardened GP2 champions both, each fought back but couldn’t repel Kovalainen’s onslaught.

Hamilton’s second stint ended on lap 33 and he spent the next ten laps behind Raikkonen, taking only a little time out of the Ferrari driver and left with only two laps to extend his advantage once Raikkonen had pitted on the 43rd tour. It was never going to be enough, and Hamilton was not very far in front of Raikkonen when he began his final stint, now on the softer tyres.

Massa, five seconds further ahead, inherited the lead back and wouldn’t be troubled by Hamilton any more. Nor was Hamilton in turn troubled by Raikkonen, who could not get within range to make a pass.

Best of the rest

The rest of the field re-organised itself through the pit stops with no real drama. Kubica held onto fourth while Nick Heidfeld rose four places from tenth. Alonso was best of the rest in sixth (team mate Piquet, after starting a poor 17th, only made up two places) having beaten Mark Webber, the Red Bull driver falling to seventh.

The final point went to Nico Rosberg, who worked his way up from 11th (using a different front wing on his Williams to team mate Nakajima) partly at the expense of Jarno Trulli, who lost three places from eighth on the grid at the start.

After the two retirements at the start the only other driver who failed to finish was Sebastien Bourdais, who spun out on lap 25. David Coulthard finished ninth ahead of Trulli and Jenson Button, with Kovalainen 12th after a late pit stop. Glock, Barrichello, Piquet, Sutil and Vettel were the remaining drivers running at the flag.