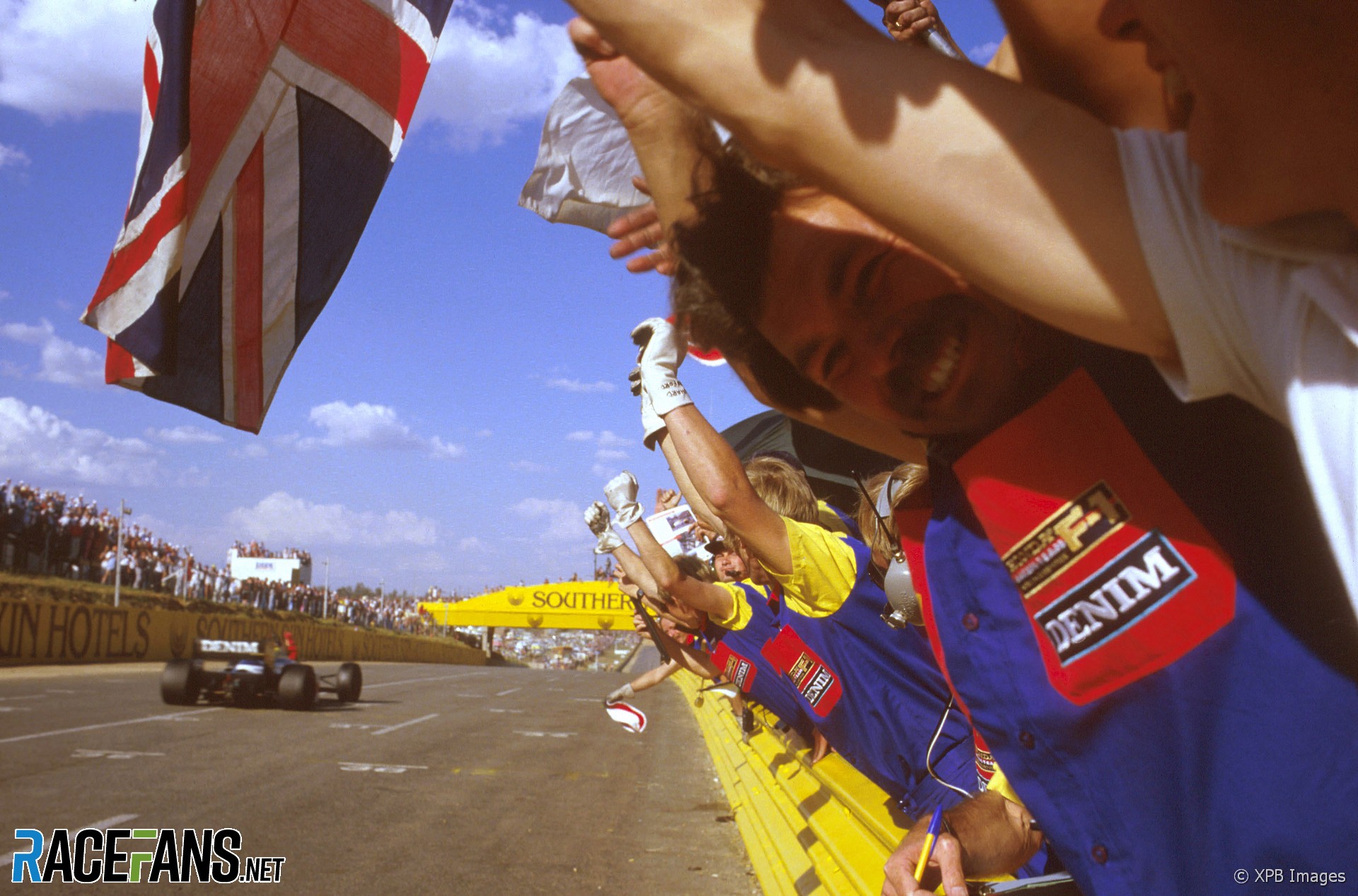 The FIA, the Spanish motor sport authorities and the operators of the Circuit de Catalunya have made all the right moves so far to ensure there is no repeat of the appalling racist abuse Lewis Hamilton was subjected to at F1’s recent test session.

It’s a far cry from the dithering and prevarication over the controversial final F1 grand prix in apartheid South Africa in 1985.

South Africa’s apartheid system of segregation of races and discrimination against blacks had been a source of international attention and criticism well before the 1980s. Pressure to isolate the country and force it to abandon its racist policies had seen some international sports boycott it up to three decades earlier.

Formula 1 was one of the last sports to abandon South Africa.

The Citizen newspaper, supporters of the South African government, sponsored the race for many years. F1 personnel visiting the country had special cards to record their entry into South Africa, to avoid having their passports stamped, which would have caused problems when they visited countries officially opposed to apartheid.

Nevertheless, even within the often insular world of Formula 1, voices of opposition began to grow. One of them was retired 1976 world champion James Hunt, a commentator for the BBC. Murray Walker recalled him speaking out about it while commenting on one South African Grand Prix:

James, who had very strong views on apartheid, suddenly launched into a withering attack on the evils of the system and the South African government.

Quite apart from the fact that this didn’t seem to be very relevant to the South African Grand Prix, it was politically provocative stuff for the BBC to be putting out in a sports programme and Mark [Wilkin, the producer] rapidly passed him a note which read, “TALK ABOUT THE RACE!”

In 1985 as the South African round approached international pressure on F1 reached a new high. The Brazilian, Finnish, Swedish and French governments were among those putting pressure on their drivers and teams not to attend.

For a while it looked as though a mass withdrawal of teams and drivers might force the cancellation of the race. Enzo Ferrari announced he would boycott the event if rivals McLaren did the same:

At the moment the World Championship seems to be between McLaren and ourselves. They are leading. If McLaren decides not to go to Kyalami, we will not go either. We would not want to take advantage of their non-participation.

Some drivers spoke publicly of their concerns about F1 endorsing apartheid and the fear of a terrorist threat. Ayrton Senna was one of them:

It is necessary to weigh the pros and cons. Things seem to be complicated over there and I don’t believe it is safe to race under such adverse conditions. I am personally against the regime. I would not like to go there, but I have a commitment to my team.

The letters page of Autosport gives some insight into the depth of feeling for and against the race. This is from the September 26th issue:

Holding a prestigious international sporting event such as a Grand Prix in South Africa will only serve to present the country’s Nationalist government with manna from heaven, a propaganda coup on a plate. In this instance, politics and sport are inseparable, for better or worse. For the FIA to pretend otherwise is not only absurd but also displays a stupidity and indifference to world events of which we as motorsport enthusiasts are deeply ashamed.

Another reader in the same issue wrote:

Sport is above politics and always has been… If it has to be Kyalami, the Outer Hebrides or Inner Mongolia, so what? The competition is the only truly important issue.

But the FIA, led by President Jean-Marie Balestre, refused to back down, and issued a statement shortly before the race:

In the light of various political demonstrations which have been organised concerning the Grand Prix of Kyalami and personal attacks against M. Jean-Marie Balestre (who on Tuesday October 8 was elected President of the FIA, and the following day President of the FISA), the FISA Executive Committee, the governing body of the sport throughout the world, declares that:
1. President Jean-Marie Balestre has no personal authority to cancel the Grand Prix at Kyalami.
2. This Grand Prix has been on the Formula 1 World Championship calendar for 22 years.
3. The 1985 calendar of the 16 Grands Prix was published in October 1984. Everybody knew the composition of the calendar, and nobody protested about the presence of a Grand Prix in South Africa.
4. The World Championship regulations oblige the FISA to respect the international calendar, and the drivers to take part in 16 Grands Prix.
5. During the Plenary Conference at which were assembled in Paris on Wednesday 9th October the representatives of the 64 member countries of the FISA, several of which are African countries, not one National Sporting Authority requested the cancellation of the South African Grand Prix.”

With the sport’s governing body refusing to cancel the race on the spurious grounds that it lacked the authority and Bernie Ecclestone, according to biographer Terry Lovell, apparently content to use the situation to extract more money from the race promoters, the South African Grand Prix went ahead.

Of the 26 cars that had appeared at most of the 1985 rounds, 21 went to Kyalami. Renault and Ligier were the only true boycotters (the former on the verge of quitting the sport anyway), following pressure from the French government. Zakspeed and RAM were not present, but in these cases a lack of money was a more pressing matter than political concerns.

Of the teams that were present, many removed logos at their sponsors’ requests: tobacco company Barclay disappeared from Arrows and Marlboro from Ferrari and McLaren. The Beatrice stickers came off Alan Jones’s Lola, and then the car was withdrawn, amid rumours that the team had been instructed to pull out.

This drew a critical reaction at the time from Autosport columnist Nigel Roebuck:

It is the hypocrisy of it that I can’t stomach. It is the selective morality, the careful removal at Kyalami of certain sponsors’ names from the cars – despite the fact that their products are readily available down the road, widely advertised beyond the TV cameras’ reach.

According to the organisers a crowd of 85,000 turned out to see the race over the weekend – a substantial increase on the previous years’ races. This emphasised the argument that having an international sporting event visit South Africa gave credence to its government.

The race, held on a Saturday, was won from pole position by Nigel Mansell. In the following weeks the FIA were still considering future races at South Africa. But finally the refusal of several television companies to broadcast the race, following pressure from their unions, forced Ecclestone to cancel the event.

An unusual coda to this story concerns Alain Prost, who on his way to the final race of 1985 at Adelaide spent three-quarters of an hour with Pope John Paul II. Prost, newly-crowned as the first French world champion, had been strongly criticised in his home nation for participating in the race when French teams had withdrawn. The Pope sympathised with him, agreeing that sport and politics should be kept separate…

The row over the 1985 South African Grand Prix is one of the more unsavoury passages of Formula 1 history.

But yesterday the FIA showed how far the sport has progressed when it responded immediately to the racist abuse of Lewis Hamilton by pointing to the passage in its statutes that reads, “The FIA shall refrain from manifesting racial discrimination in the course of its activities.”

The argument about whether sports should take heed of political concerns is one that continues to come up. There is considerable public and political pressure growing on China ahead of this year’s Olympic games in Beijing over the country’s dismal record on human rights and other matters.

None of this has yet troubled the organisers of the Shanghai Grand Prix. But as recent and more distant events have shown, F1 does not always exist in a vacuum.

Did you attend this race? Do you remember watching it at the time? Let us know in the comments.