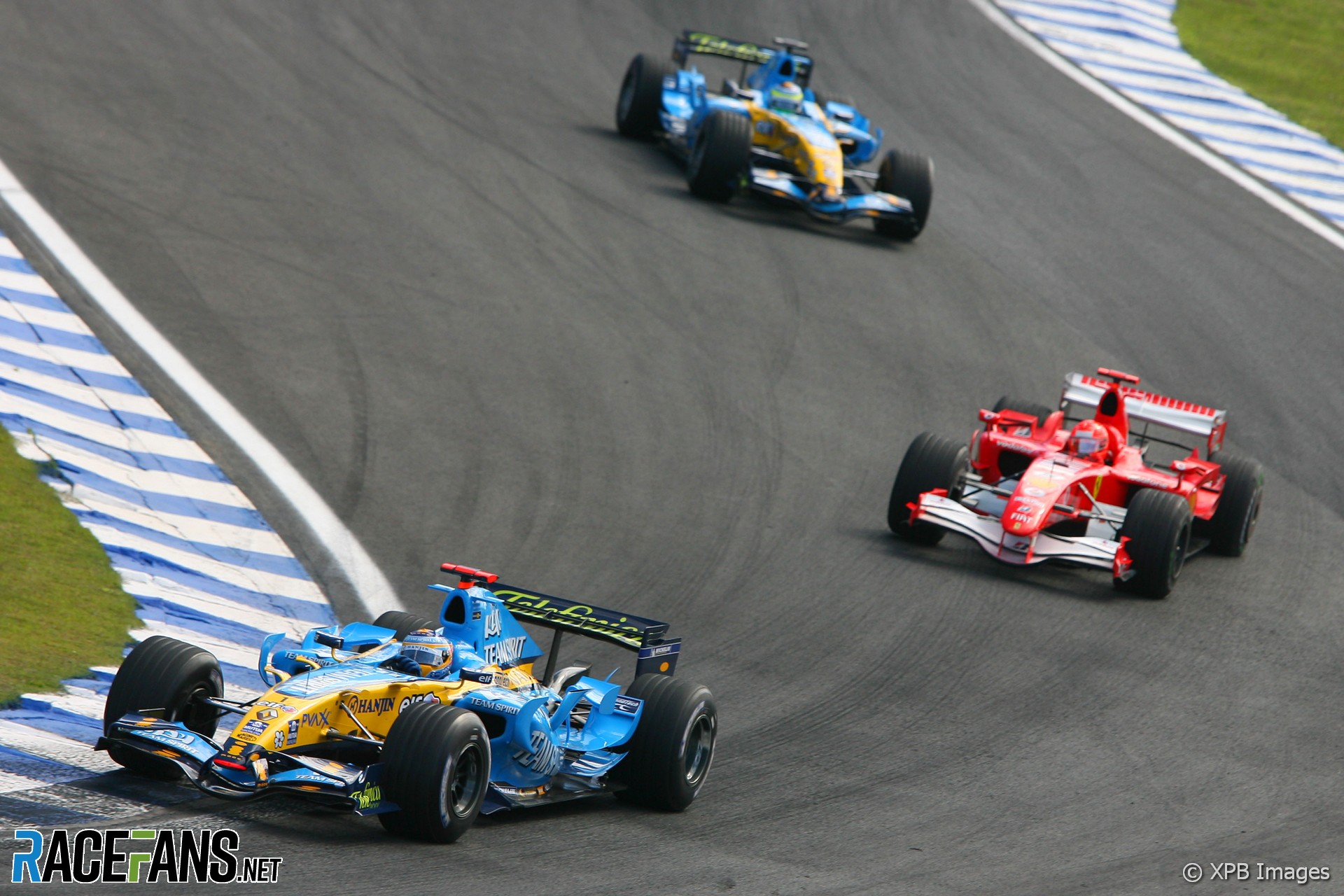 In his final F1 race Michael Schumacher delivered a spellbinding performance that recalled his most memorable victories.

But Fernando Alonso claimed the championship with a crucial second place, while Schumacher battled magnificently from 19th to 4th following a tyre failure.

It was his team mate Felipe Massa who scored a comfortable first win at home – only the second of his career.

Michael Schumacher came to Interlagos hoping to win the drivers’ championship from the most desperate position possible. Although his car had the pace to win the race by a lap, more rare bad luck would thwart him.

It began in the third part of qualifying. Ferrari had dominated the first two parts, despite a late gearbox scare for Massa. But as the third began Schumacher coasted into the pits with low fuel pressure and failed to set a time – relegating him to tenth on the grid.

Massa therefore faced little opposition to set pole and was joined on the front row of the grid by his 2007 team-mate Kimi Raikkonen. Behind them Jarno Trulli’s lightly-fuelled Toyota pushed Fernando Alonso down to fourth. Giancarlo Fisichella and Rubens Barrichello were fifth and sixth.

Race day dawned hotter than expected and the circuit crackled with tension and anticipation. The massed ranks of Brazilians had eyes only for Massa – even though he had earlier told the press that he would sacrifice the win to Schumacher if he needed to.

The top six scrambled through the first corner in the same order but behind them the field was often three-abreast. The BMWs and Ralf Schumacher were three wide at turn one, holding the elder Schumacher back.

But at turn four the two BMW drivers pushed each other wide and Schumacher capitalised. Then he brushed his younger brother aside and, on the second lap, nipped past Barrichello to take sixth.

This rapid progress was curtailed by the appearance of the safety car. Nico Rosberg had run into team mate Mark Webber on the first lap, sending Webber limping into the pits and retirement without a rear wing.

Rosberg had lost his front wing and, perhaps failing to compensate adequately for it, flew off the track at turn 14 and demolished his car. It was an undignified end to a dismal year for Williams.

Once the debris had been swept clear the resumed on lap six, with Schumacher frantically trying to overcome Fisichella.

Massa quickly pulled away from Raikkonen while Trulli came under attack from Alonso. The Renault driver swung out to pass the Toyota on lap eight at turn one and Trulli uncharacteristically defended, well aware that Alonso wouldn’t be risking a collision today.

This allowed Fisichella and Schumacher to close in and, on lap nine, Schumacher made his move. He squeezed by on the inside but, as Fisichella tried to re-pass, the two appeared to make the briefest of contact. Suddenly Schumacher’s Ferrari was lurching to one side and he began nursing it back to the pits as the left-rear tyre fell apart.

After examining the tyre Bridgestone later suggested that it had been punctured by debris, and not necessarily by contact. But that would have been no comfort to Schumacher as he rejoined the race 19th, only ten seconds away from being lapped.

The younger Schumacher pitted on the same lap as has brother to retire with a rear suspension problem. It led Toyota to retire Trulli’s car as well, fearing a repeat failure.

By lap 13 Massa had 7.5 seconds over Raikkonen, who in turn had 3.5 over Alonso. But now the Hondas were beginning to put pressure on the Renaults with Barrichello and Button both catching Fisichella.

On lap 21 Raikkonen, Fisichella and Barrichello all headed for the pits. Barrichello took slightly less fuel than Fisichella, perhaps in an effort to get out ahead. But the team practically waved him into Fisichella’s path, the pair narrowly missing each other.

Massa pitted on lap 24 and lost position to Alonso and Button. Button has started 14th after his qualifying had been compromised by a faulty wheel speed sensor that compromised his traction control. Strong race pace saw him to drag his fuel-heavy Honda to the front.

He pitted on lap 26, one earlier than Alonso, but Button’s longer first stint helped him leap past Barrichello and Fisichella.

Alonso passed Raikkonen for second thanks to his later pit stop. Button did it the hard way – with a peach of a pass from a long way back on lap 29 into turn one.

By then Schumacher was 16th and catching Tiago Monteiro’s Spyker. His enforced stop had at least been sufficiently within the pit stop window for him to take on enough fuel to only need one more stop. As other drivers pitted, he moved forward. Next time around he was 13th.

Now Schumacher was coming within range of the leaders, aided in no small measure by a total lack of defensive driving from some of the midfielders. Neither BMW driver made any serious attempt to protect their positions.

Having passed Kubica, Schumacher briefly ran wide and lost the position. But on lap 42 he once again drove past the Pole as if he wasn’t there. Having done that he proceeded to reel Barrichello in at 1.5 seconds per lap.

Massa’s lead was now so great that he didn’t lose the lead when he made his final stop on lap 52. The final stops didn’t change the order among the seven leaders – Massa remained ahead of Alonso, Button, Raikkonen, Fisichella, Barrichello and Schumacher.

Whatever the final laps had to offer Schumacher’s recovery had already been remarkable. And given how straightforward his progress past the likes of Kubica had been, it still seemed he might win the race and even the championship, if Alonso somehow faltered.

Certainly Barrichello put up no more than token resistance when Schumacher passed on lap 51.

He quickly hauled in Fisichella, but no sooner had he caught the Italian that he inexplicably ran wide on lap 58, dropping to 1.8s behind. It took him five more laps to pass the Renault, when Fisichella out-braked himself into the first corner, letting him breeze past.

His replacement for 2007, Raikkonen, would prove even tougher to crack – and completely unsympathetic to Schumacher’s retirement. Earlier he had disdainfully told reporters that he was in the toilet while football legend Pele handed Schumacher an enormous gold trophy on the starting grid.

As Schumacher drew Raikkonen in, at the start of lap 68 the Finn squeezed him towards the pit lane, holding him back. It was a basic defensive move, textbook stuff – apparently a foreign concept to several other drivers.

Schumacher’s retaliation the very next lap was from no textbook – it was the kind of gutsy brilliance you expected from the seven-times champion. He pitched his car down a gap scarcely wider than the Ferrari, almost rubbed wheels with Raikkonen, and seized fourth place. Majestic stuff.

But time had run out for him. There were only two laps left of his final Grand Prix – not enough time even for Michael Schumacher to gain 6.5 seconds on Jenson Button.

The first two drivers across the line were ecstatic: Massa, a first-time winner at home, in his first race there for Ferrari.

For Alonso, second place gave him the title by 13 points. But not just any title. A title won against Michael Schumacher, in a year when Schumacher often had the better car. A second consecutive title, which only seven others have ever achieved. And that at an even younger age than anyone before him.

Behind the winner and the champion, Button had risen brilliantly from 14th to take the final podium position. Schumacher was fourth and afterwards admitted that had it not been for his tyre failure he could have lapped the entire field.

Raikkonen was a disappointed fifth in his final race for McLaren. Fisichella was sixth, comprehensively out-driven by his team mate yet again, despite racing with a more potent engine.

Barrichello and de la Rosa took the final two points-paying positions – the latter possibly in his final race. Kubica, ninth, was the last driver not to be lapped.

Largely out of sight for most of the race Takuma Sato took an impressive 10th for Super Aguri, ahead of Speed and Robert Doornbos, another driver who looks set to miss out on racing action for a while. His team mate David Coulthard retired on lap 14.

Vitantonio Liuzzi, 13th, was beaten by his team mate again and Christijan Albers finished ahead of Monteiro despite spinning on lap 61. Sakon Yamamoto, another driver whose racing career may be over, was the last runner in 16th. But Heidfeld was classified 17th despite crashing out violently with suspension failure nine laps before the chequer.

The Brazilian race was an exciting end to the 2006 season and if it was hard on Schumacher, at least it was free of controversy. Formula 1 will look very different when the teams re-assemble in Melbourne in five months’ time.