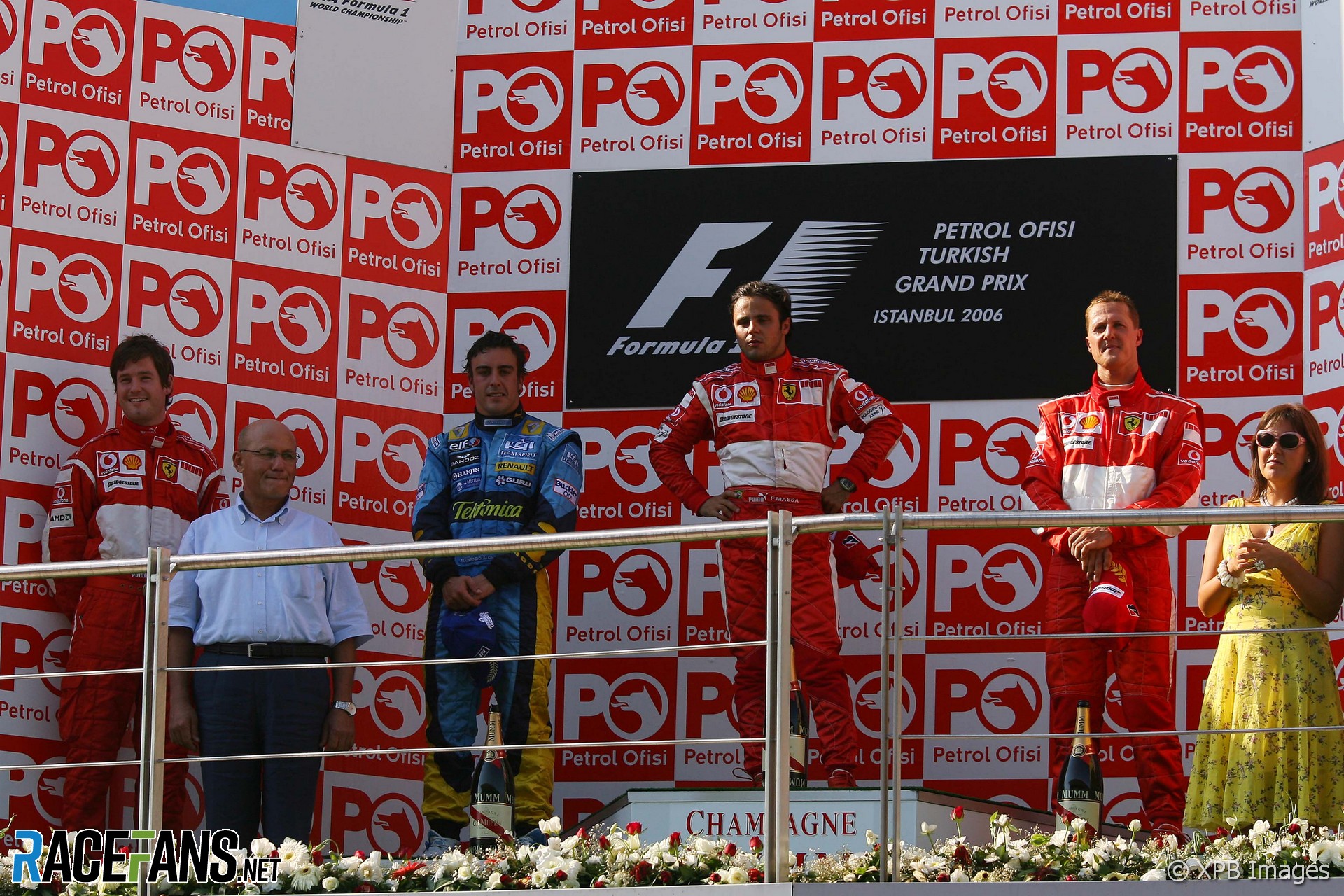 What should have been a textbook cruise to maximum championship points for Michael Schumacher fell apart – and handed his grateful team mate a maiden grand prix win.

Fernando Alonso took a vital second place to extend his lead in the championship for the first time since June. But the Renault driver isn’t in the clear just yet.

When Schumacher set a blistering lap of 1’25.850s in the second part of qualifying – a full second faster than anybody else could manage – the outcome of the Turkish Grand Prix seemed dead certain.

Few would have bet against a Schumacher pole position followed by a Schumacher stroll to victory, complete with team mate Felipe Massa a dutiful second to inflict maximum damage on Alonso’s championship chances.

But through a mixture of unforced errors and the unfortunate intrusion of the safety car, Schumacher squandered a major opportunity.

Schumacher twice ran wide at the first corner in the final part of qualifying, allowing Massa to beat him to pole. Behind them Alonso and Giancarlo Fisichella were poised to unleash the famed start-line speed of their Renaults.

Ferrari had clearly choreographed their start to contain Alonso and it worked to perfection. Schumacher swung right to box in the Spaniard behind Massa, preventing Alonso from gaining any places.

Fisichella was forced to take evasive action and spun, causing instant chaos. Christian Klien locked his brakes hard and speared straight on, forcing Kimi Raikkonen to dive off the track. He has hit by Scott Speed which punctured his left-rear tyre.

A fast-starting Nick Heidfeld arrived at the chaos in time to lose his front wing (as did Fisichella), Ralf Schumacher spun and Tiago Monteiro was left with nowhere to go, crashing out.

None of this was severe enough to merit the appearance of the safety car, but it promoted the Williams of Mark Webber and Nico Rosberg to a promising fourth and sixth from ninth and fourteenth respectively, sandwiching Jenson Button.

Vitantonio Liuzzi was the biggest beneficiary, climbing eleven places to seventh. Sadly, he would slowly drop down the order, unable to defend himself at a track where overtaking is a possibility.

Massa was able to stretch ahead in the early laps, revealing that he had been fuelled lightly in an effort to guarantee he out-qualified the Renaults. Schumacher also pulled away from Alonso, biding his time and knowing his heavier fuel load would carry him ahead of Massa, if team orders didn’t.

But that plan was scuppered on lap 13 when Liuzzi spun at turn one while defending from Jarno Trulli’s Toyota and was unable to move his car from the kerbing on the outside of the corner.

This sent the leaders scrambling for the pits and Schumacher’s delay behind Massa’s stop dropped the German behind Alonso. Schumacher now on the back foot, needed to attack Alonso if he was to make any progress in the championship.

At the restart a dawdling, lapped Heidfeld protected Massa from Alonso, but the Spaniard was quickly past the BMW, followed by Schumacher.

Further back the qualities of Istanbul Park as an overtaker’s circuit were on display for all to see.

Robert Kubica executed an exquisitely-judged move on Webber, and a recovering Fisichella followed him through at the final three corners on lap 18. Next time round, Fisichella picked off Kubica but the Pole pushed him hard for the position.

Rubens Barrichello tried the same move on Jarno Trulli but his Toyota rival smartly revered the move. Pedro de la Rosa nabbed Klien on the outside of the same bend to take sixth. Kubica succumbed to Ralf Schumacher in the same way on lap 23.

The battle for the major places between the championship leaders was less swashbuckling but extremely tense. On lap 28 the tension took its toll on Schumacher, who slithered wide at the high-speed, high-G load turn eight and struggled to rejoin the circuit.

It could have been provoked by any number of distractions: the stamina-sapping forces, frustration at his early misfortune, the pressure of the championship hanging in the balance, or just plain brain-fade. The immediate cost of the mistake was four seconds – but it would prove far more costly than just time.

There was only a smattering of retirements, which were confined to the usual suspects. Sakon Yamamoto spun out at turn one on lap 24, having started the weekend on a high by out-qualifying Takuma Sato. Nico Rosberg’s Williams gave up – their tenth mechanical failure in a race this season.

The leading trio picked up the pace in unison as their final pit stops approached, and Massa and Alonso made for the pits together on lap 38. Schumacher continued for another three laps, attacking the fastest lap time before diving into the pit lane.

The Ferrari mechanics turned Schumacher around in next to no time but couldn’t get him out before Alonso had shot past. Now the championship leaders would go toe-to-toe for the final fifteen laps.

The Ferrari 248 hounded the Renault R26 in the slow corners, and slipped slightly out of range in the quick ones. Alonso was most vulnerable at the end of the lap, especially running from the last corner to the first – rear tyre wear the culprit.

The laps ticked by inexorably. Once Schumacher took a dive at Alonso on the outside of turn seven, but Alonso tucked the seven-time champion up at the apex, slowed him down, and scampered off again.

Off in the distance Massa was lapping serenely. Although Schumacher and Alonso were compromised and lapping comparatively slowly, Massa never capitalised. He was waiting for the call from Jean Todt.

But it never came. Fernando never faltered, and Felipe took his first ever win. Alonso and Schumacher crossed the line just 0.081s apart.

Behind them Jenson Button was a solid ‘best of the rest’ ahead of de la Rosa and Fisichella. Barrichello chased Ralf Schumacher across the line for the final two points positions.

Trulli was thoroughly undone by Ralf (who had started much further back) and languished in ninth, one place ahead of Webber. The Australian had earlier looked set to break Williams’ long and painful string of races without scoring points.

The remaining classified finishers were Klien, Kubica, Speed, Heidfeld and Coulthard. Takuma Sato was still running at the end but failed to complete enough of the race distance to be classified.

The Turkish Grand Prix was a race of missed opportunities for Michael Schumacher. Although the safety car played a role, he must know that it was his own unforced errors that let Alonso off the hook.

Will this serve to increase the pressure on the multiple champion, and provoke more errors, or just strengthen his resolve? We’ll find out at Monza in three weeks’ time.