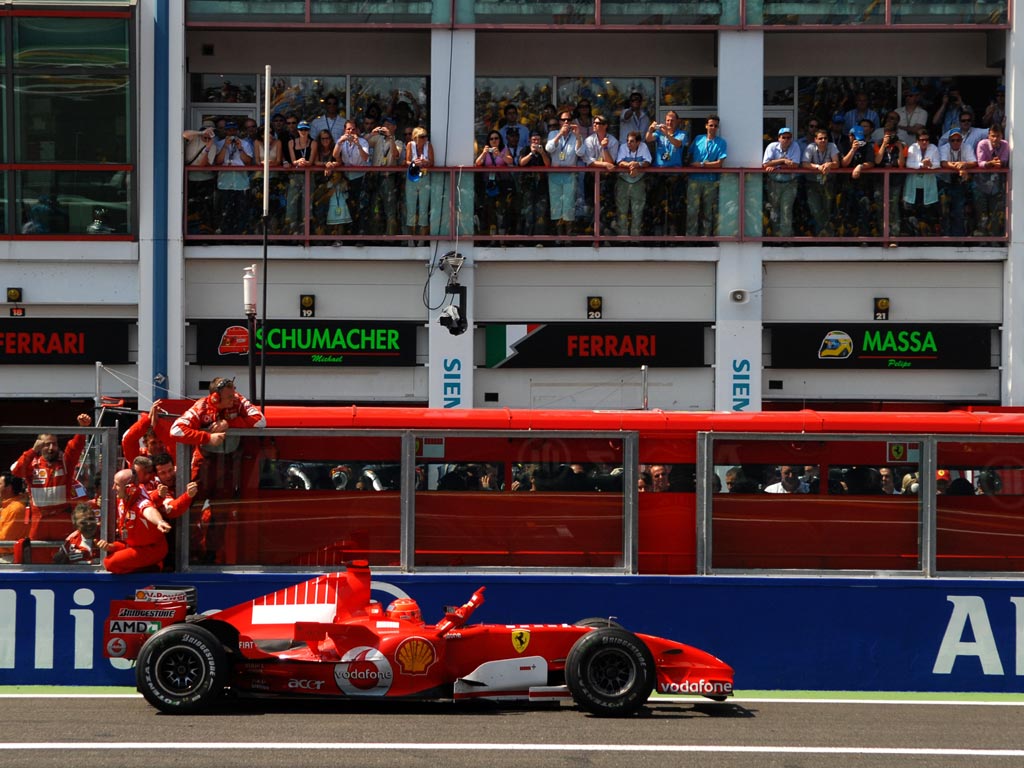 Did Juan Pablo Montoya even watch the French Grand Prix? If he did it probably confirmed all his worst opinions of the sport he turned his back on.

Michael Schumacher strolled to an easy win while championship leader Fernando Alonso was kept at bay by his team mate in the early stages. There was precious little overtaking, and Alonso only claimed second late into the race thanks to a change in refuelling strategy.

On the grid before the race, the pressure was all on Alonso. The Ferraris in front, Felipe Massa fuel-light and surely out to spoil the Spaniard’s start. The Toyotas behind him, threatening to punish a poor getaway with a first stint spent in traffic.

Worse, the short run to the first corner offered little opportunity to wield the Renault’s greatest weapon – its phenomenal acceleration from a standing start.

Sure enough, Massa tucked up Alonso at the run into the long Estoril corner, then almost parked his Ferrari on the apex of the Adelaide hairpin while Schumacher made his escape.

The top seven held their positions from the start, with the Toyotas of Jarno Trulli and Ralf Schumacher fourth and fifth ahead of Kimi Raikkonen and Giancarlo Fisichella.

Pedro de la Rosa, in for the NASCAR-bound Juan Pablo Montoya at McLaren, was beaten into eighth place by Mark Webber. The Williams driver struggled for pace in the first stint, but not so much that Alonso could get past him.

Alonso had the same problem up front with Massa. Ferrari’s game plan was clear: Massa was running consistent laps in the low 18s, with Schumacher doing the same but occasionally pushing the Ferrari into the high 17s. The team tactics gave Schumacher a six second lead by the time the first stops began on lap 18.

Massa pitted first which allowed him to use the excellent first-lap pace of new Bridgestones to ensure he held track position ahead of Alonso. Indeed after Alonso’s stop on the following lap he fell from being within one second of the Ferrari to 5s back – and apparently unable to catch up.

Rubens Barrichello’s Honda came to a halt with a whiff of smoke on lap 19. He had led a queue of cars earlier on and been passed by Scott Speed’s Toro Rosso.

The Toyotas ran slightly longer on their first stops, Ralf Schumacher holding out until lap 22. But foul luck struck when he did make his stop, a stubborn left rear wheel holding him in the pits for an extra ten seconds, dropping him from fourth to seventh.

In the second stint it became clear that the Ferraris were enjoying a pace advantage over the Renaults. After shining in Indianapolis Fisichella was having another indifferent race, and Alonso was wringing the neck of the R26 just to lap fractionally slower than Massa.

Having lost the buffer of his team mate, Trulli now came under threat from Raikkonen. The Finn had a lunge at Adelaide but the Toyota driver held his ground, only to be left standing by the McLaren’s surprisingly good traction which carried Raikkonen into fourth as they approached the Nurburgring chicane.

His McLaren team mate de la Rosa also demonstrated his overtaking ability at the Adelaide hairpin on lap 37, squeezing ahead of Nick Heidfeld.

The second round of pit stops began almost bang on the halfway mark in the race, Massa making a rapid stop on lap 36. Schumacher’s on lap 38 was similarly brief, but Renault rolled the dice at Alonso’s stop, giving him a heavier load of fuel. Would it be enough for Alonso to make it to the end?

If Trulli thought he’d shaken off his misfortune in the American races his return to Europe brought him crashing back down to earth. His Toyota gave up on lap 40.

He joined Takuma Sato, who had struggled to get off the line on the formation lap and retired soon after, and Tiago Monteiro, who retired on lap 12 after a lurid spin at the Nurburgring chicane.

Webber was in trouble too, his Williams apparently shredding its left rear tyre. After a few attempts at fixing the problem he was retired and team mate Nico Rosberg’s car inspected too.

While Alonso struggled with his heavy fuel load Raikkonen briefly looked able to threaten him, taking up to 0.5s per lap out of the Renault. He whittled the gap down to 3.1s by his pit stop on lap 53, after which he resumed behind Ralf Schumacher.

Felipe Massa made his last stop on the same lap but it quickly transpired that Alonso was indeed fuelled to the end of the race. Schumacher pitted on lap 55 and resumed comfortably clear of the Renault, but Massa could do nothing to challenge Alonso.

The race ran to the end with no further incident, bar Button’s retirement with engine failure.

Schumacher’s win took two points out of Alonso’s lead and sets up a battle for the championship that could well go down to the wire. Ralf Schumacher took fourth despite his pit stop problems – Raikkonen, fifth, was compromised by a tyre problem that forced an early second pit stop.

Fisichella, sixth, did nothing to help his team mate’s title bid in the way Massa did for Schumacher. De la Rosa took seventh on his return to racing and Nick Heidfeld grabbed the final point in a BMW that featured some intriguing and hideous new front wing appendages.

At the tail of the field was Franck Montagny, signing off at home in his last outing for Super Aguri. He had held Monteiro back earlier on before the Midland driver spun out.

The championship moves on to the Schumacher stronghold of Hockenheim next. Alonso’s championship bid hinges on whether Renault’s revised car can bring him back onto the pace.

With any luck, the Hockenheimring layout which encourages overtaking may also neuter the influence of refuelling strategies – and team orders – and give us a race worth watching.

3 comments on “Schumacher cruises to win in France”